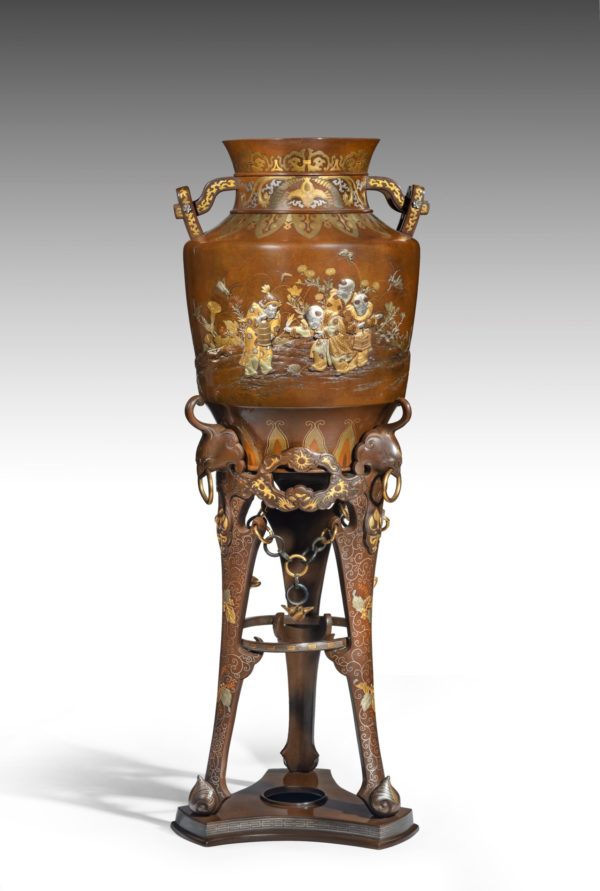 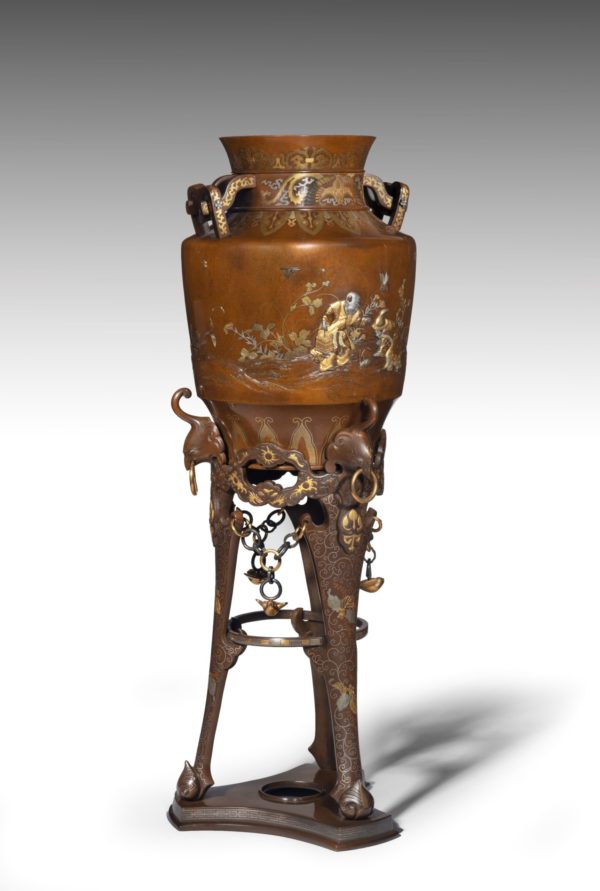 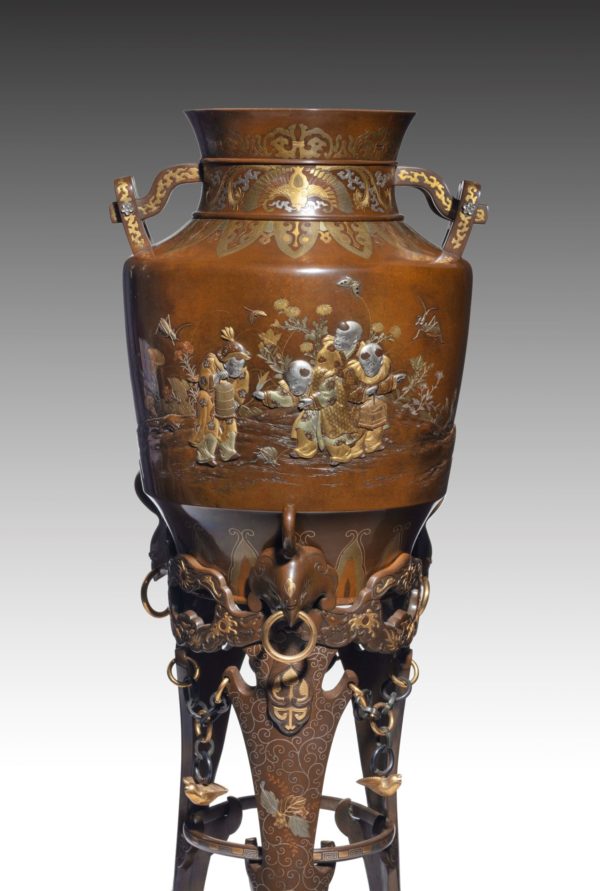 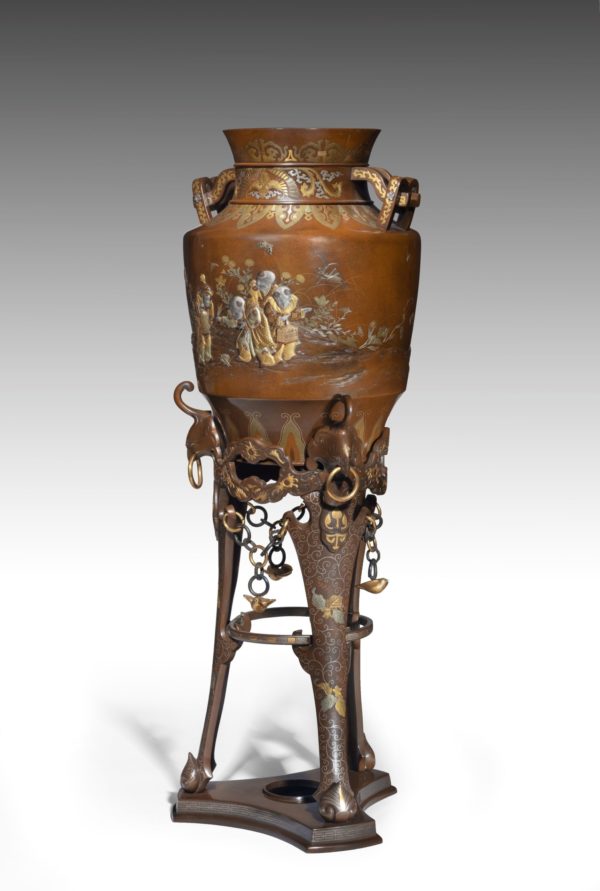 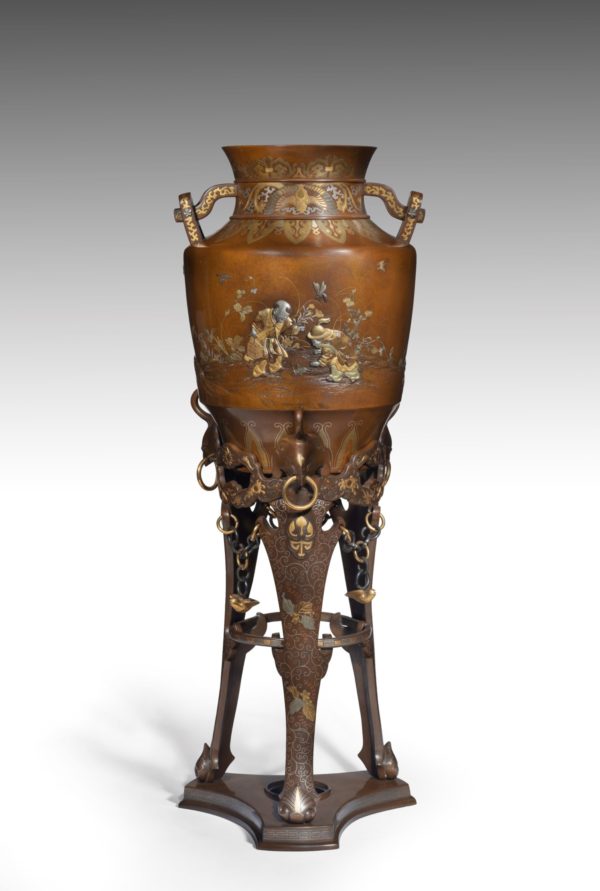 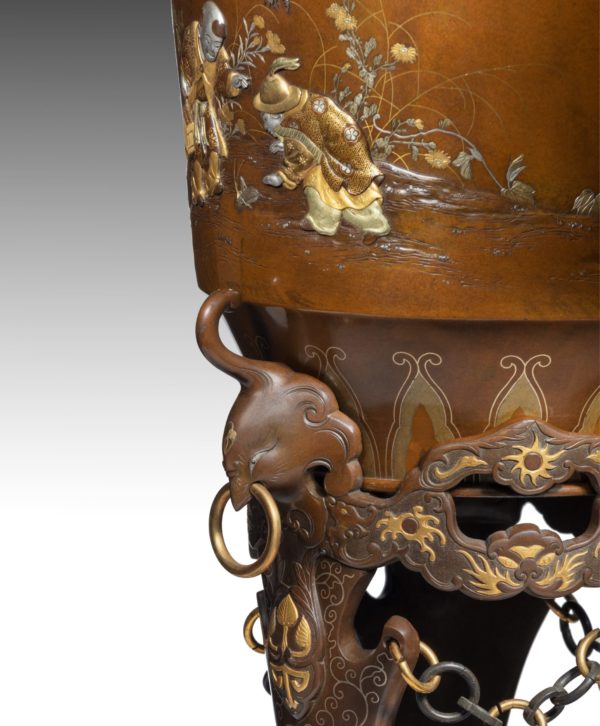 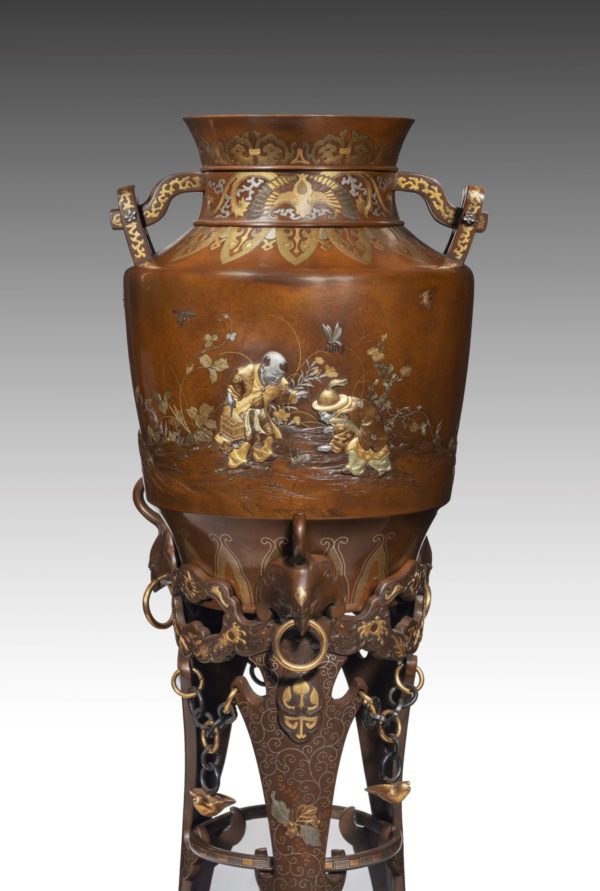 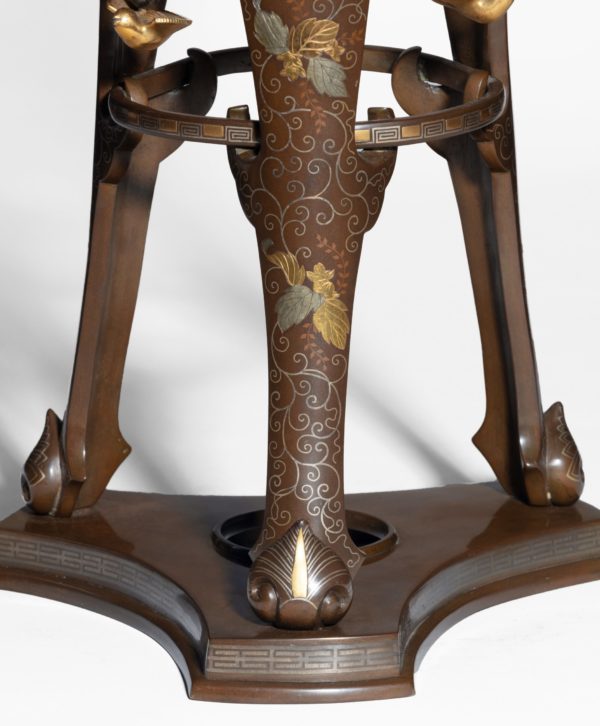 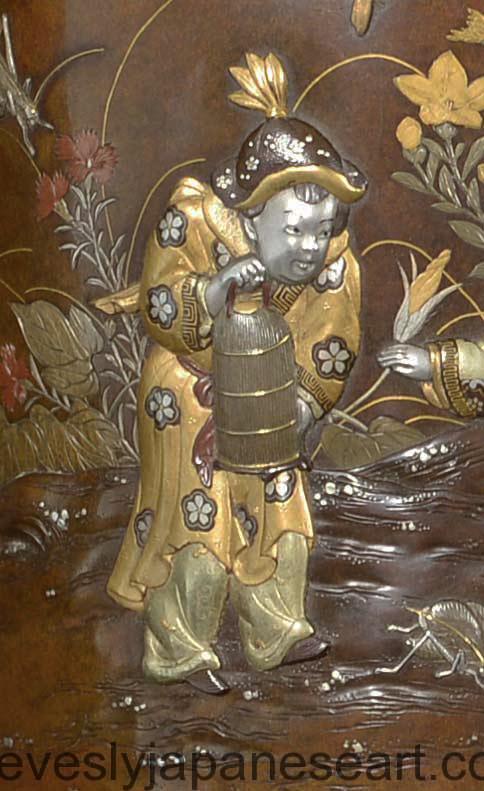 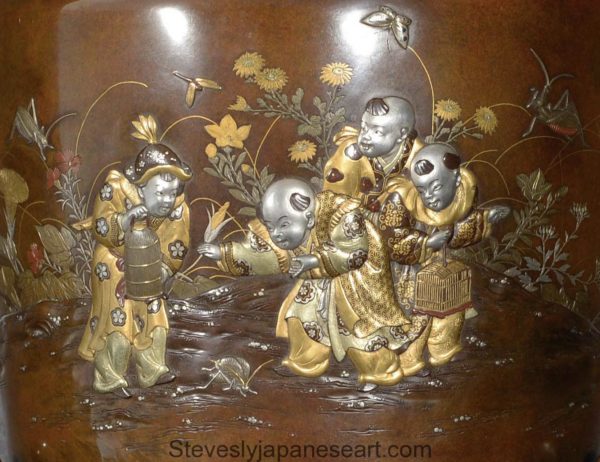 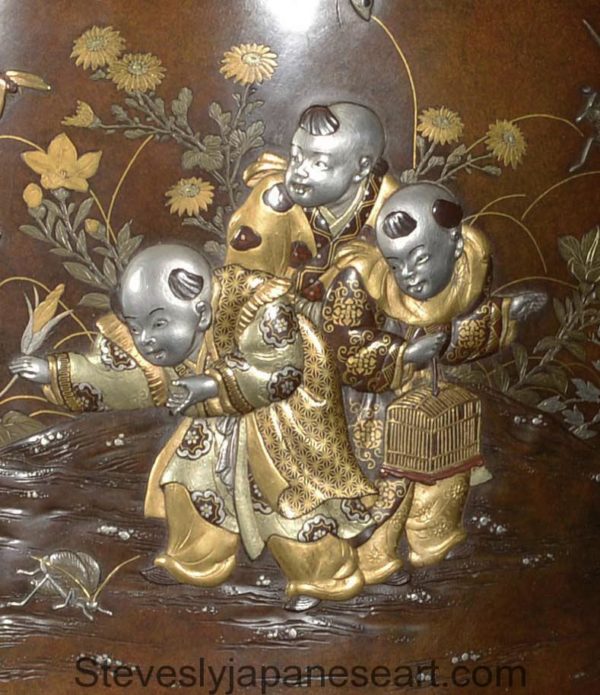 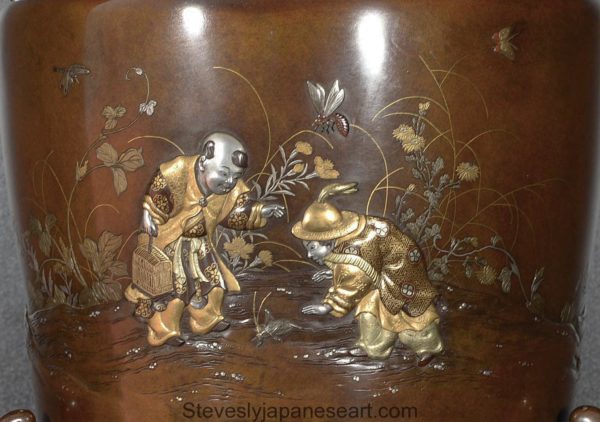 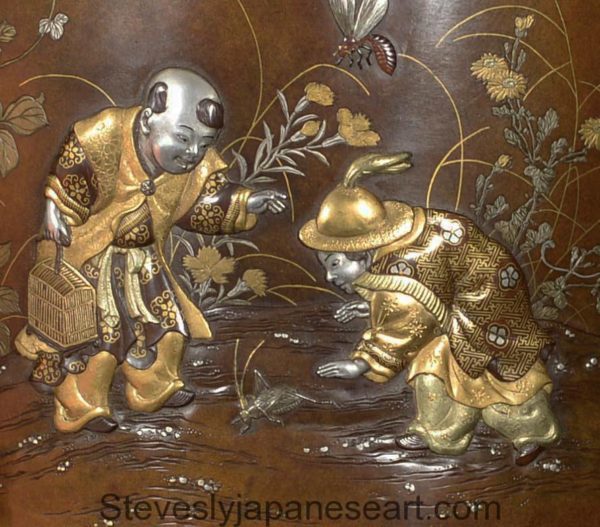 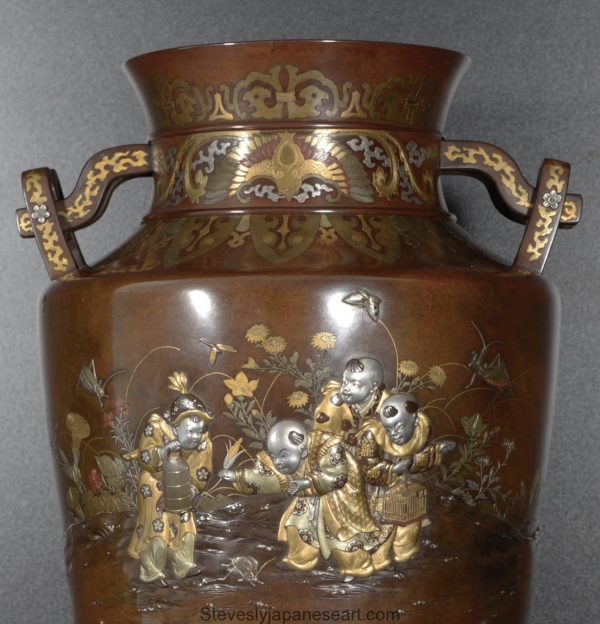 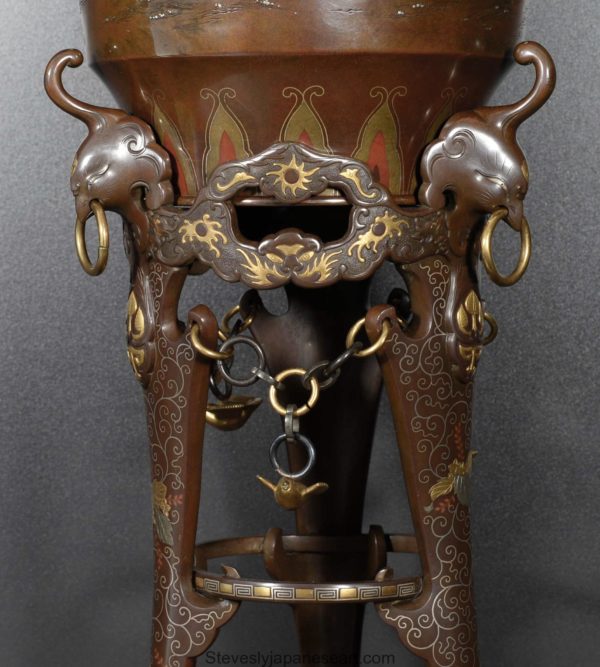 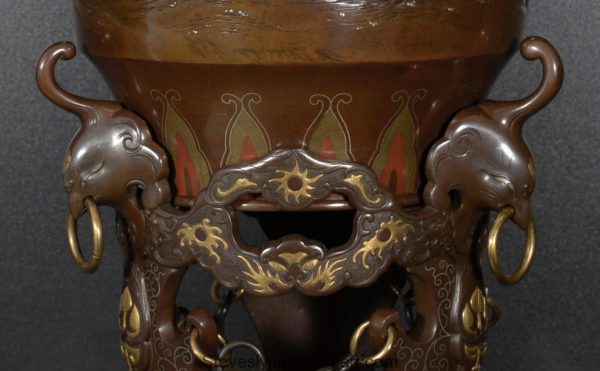 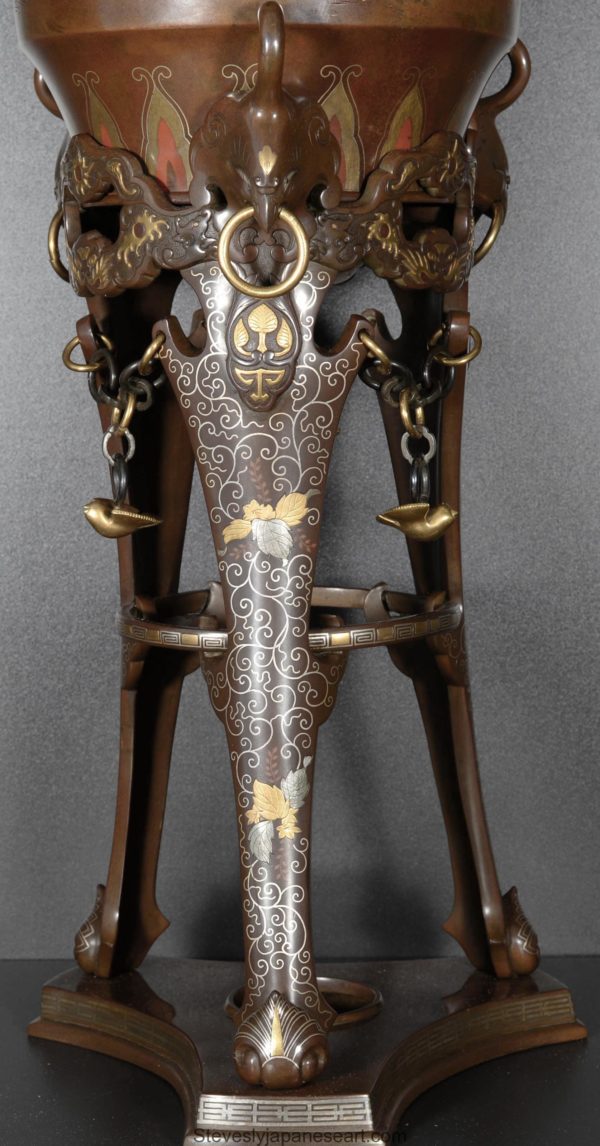 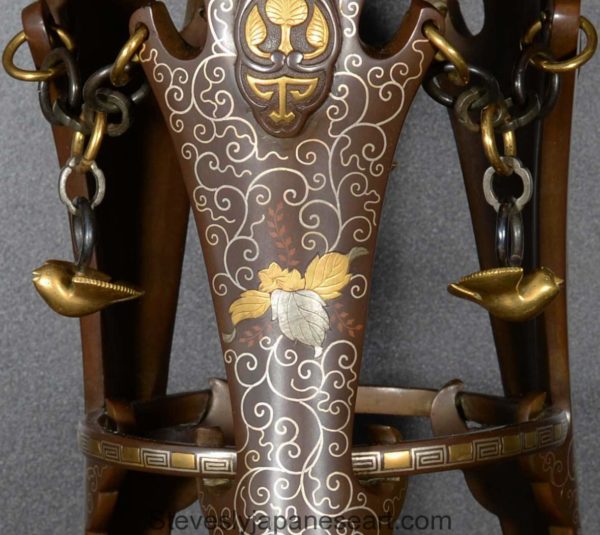 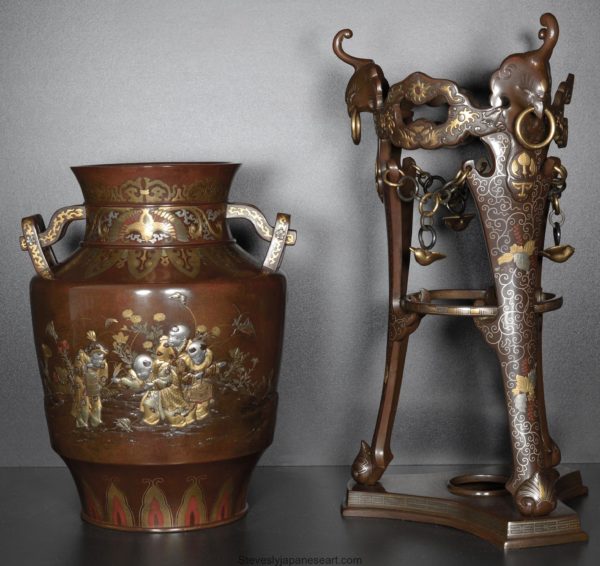 As part of our Japanese works of art collection we are delighted to offer this outstanding quality Meiji period bronze and mixed metal vase on stand, although unsigned the vase can be firmly attributed to the works of the Kanazawa Doki Kaisha, a manufacturing company formed in the Kaga provence in around 1873, the vase stands on a three legged base inlaid in fine detail with silver and mixed alloy bands of stylized decoration and flora, beneath heads of mythical birds carrying rings from their mouths, between each leg is suspended a gilt bronze bird on mixed metal chains, the main body of the inset heavy bronze vase is moulded in low relief to resemble a landscape backdrop, upon which the artists have inlaid a multitude of flora and fauna as well as sumptuous quality onlaid mixed metal insects and butterflies, the stand out feature has to be the charming but exquisite quality onlaid mixed metal children having great fun catching crickets for their cricket cages , the decoration is just the highest possible standard imaginable at this time, richly damascened clothing adorn the silver, gold, shibuichi and shakudo figures, clearly the former sword fitting makers at the Kanazawa Doki Kaisha had excelled at turning their metalwork skills to the creation of lavish goods now aimed at the new found export market, the base and shoulders of the vase further inlaid with geometric formal decoration and mythical birds and beasts using other mixed alloys, a sheer piece of brilliance and opulence from a highly regarded school of artists.

Formerly in a US collection and since supplied by ourselves to a UK based Japanese works of art collector.

Now available as  [part of the entire collection purchased from the executors of that estate.

The Kanazawa Doki Kaish was incorporated in Meiji 10 (1877 ) commissioned by the Japanese government they made many outstanding Bronzes for exhibition at the numerous expositions of the period, including Vienna 1873 and Paris 1876 , the company was officially closed in 1894 , the Kaga Fief was one of the most powerful areas of Japan, ruled by the Lords of the Maeda family they strongly promoted the arts and crafts of Japan .

The vase and base are in outstanding condition throughout .