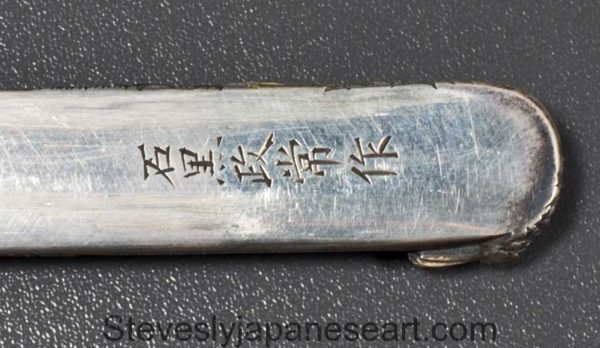 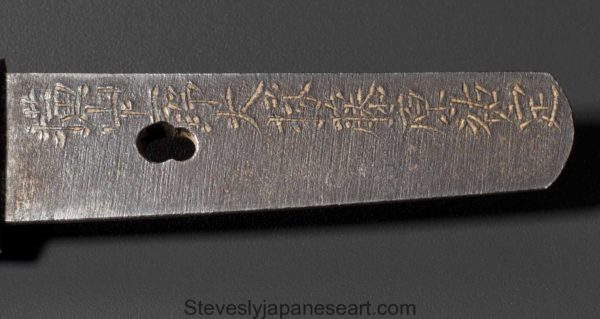 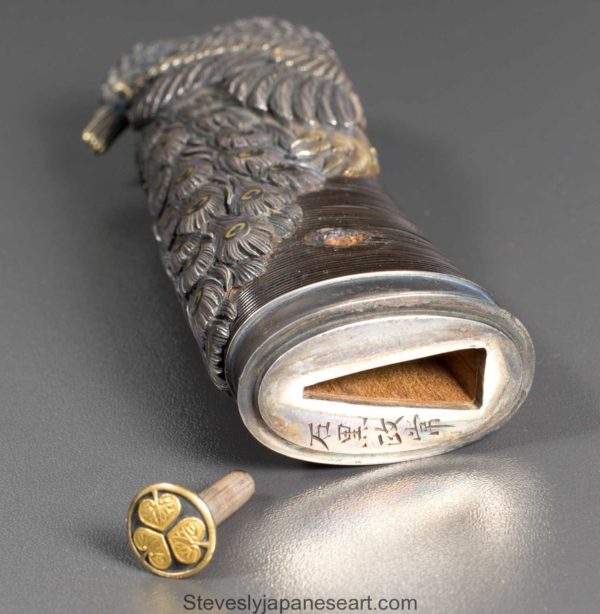 As part of our Japanese works of art collection we are delighted to offer this outstanding and rare late Edo period O-Tanto Wakizashi (short sword) the 17th century blade (details below ) has been re mounted towards the end of the Edo period by the highly regarded Masatsune family of metalworkers , the solid silver and mixed metal mountings are of the most sumptuous quality imaginable, the Peacocks envelope themselves around a staggering quality Gold lacquer scabbard decorated with multi coloured Peacock feathers throughout , the Habaki has ben decorated with an enamel mon similar to that used by the Tokugawa family, rulers of Japan for almost two hundred and fifty years , the 17th century blade is fully signed to the Tang ( details below) as are the Kozuka and Kashira, a simply breath taking piece of Japanese craftsmanship from the middle of the 19th century , further attributions documented below .

Fujiwara Sukesada was active circa the 寛文Kanbun era (1661-1672) of the Edo period; therefore the sword belongs to the 新刀Shinto sword production period (circa 1596 – 1781).

His given name: Heibei. He was born in Kan’ei 10 (1633) and was granted the title of the kōzuke-daijō in the seventh month of Kanbun 4 (1664) by the lord Ikeda Mitsumasa of the Okayama domain, in the Bizen province (in modern Okayama prefecture). Sukesada’s step-father and son were also sword-smiths.

The image of毘沙門天Bishamonten (Vaiśravaṇa in Sanskrit ), Chief of the Four Heavenly King Generals, is carved as a talisman on the body of the blade.

The Habaki (a wedge shaped metal collar fitted over notch on blade) and scabbard are decorated with a “Tokugawa style” mon.

Masatsune I: 1760-1828. The founder of the Ishiguro School of metalwork. He studied the metal work tradition of the Yokoya School. Edo (Tokyo)

Masatsune II: Son of Masatsune I. Succeeded as Masatsune II in 1829. Active in Tempo 7 (1836). The precise dates of his birth and death are unknown. Edo (Tokyo)

Masatsune III: Adopted son of Masatsune II. No precise dates of his birth and death are known, but he was alive in the Meiji 1st (1868). His signature is rather unique and often used the character 正文 rather than 政. Edo (Tokyo)

The lacquer and mounts are in magnificent condition as is the blade itself , the item has been sent for light and sympathetic expert cleaning.

Free worldwide delivery included in the price of this item .