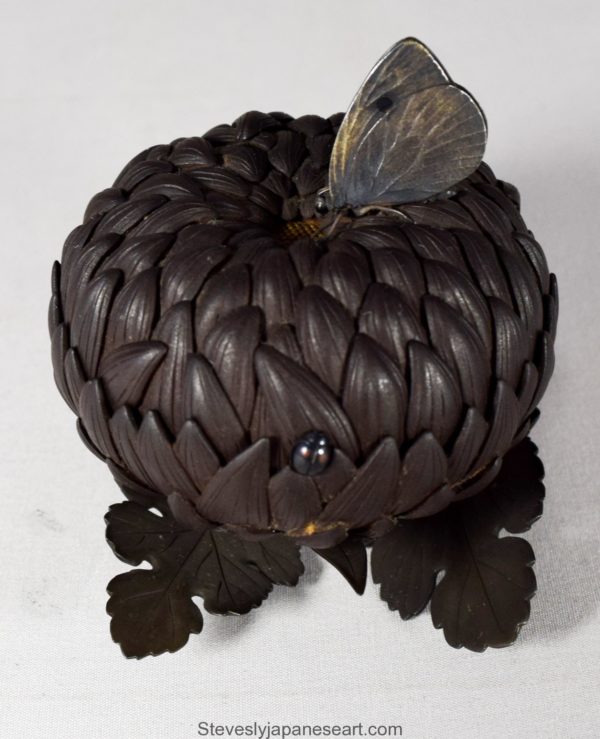 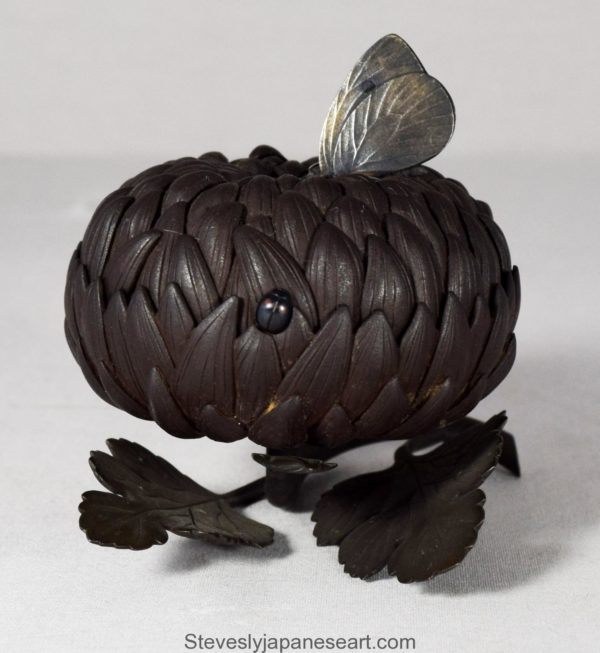 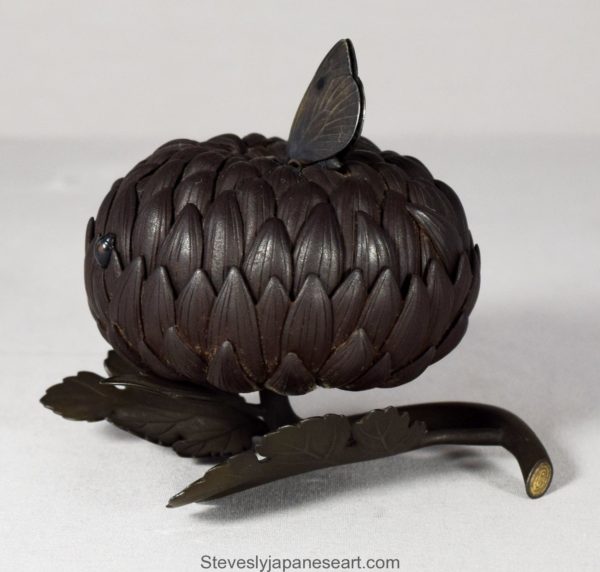 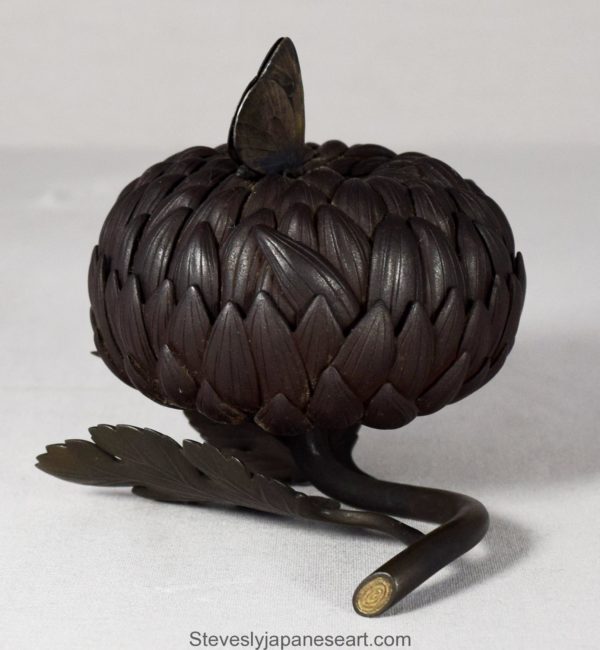 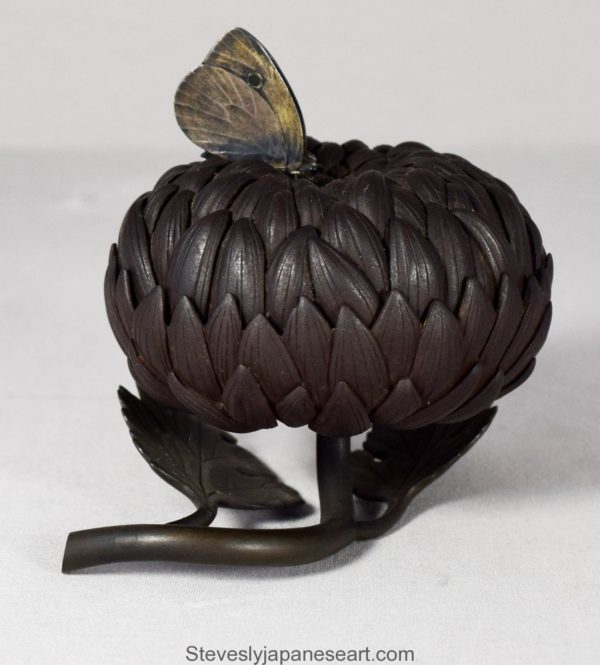 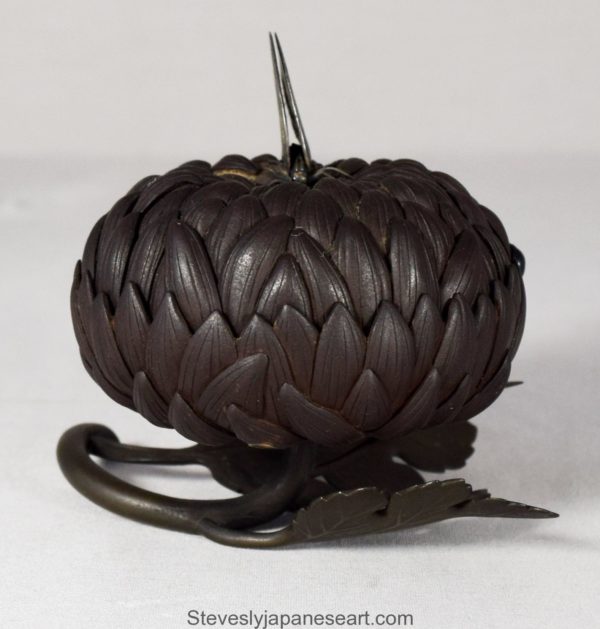 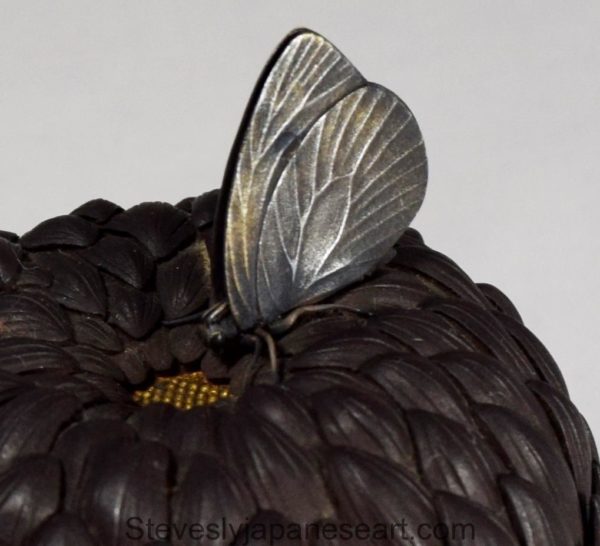 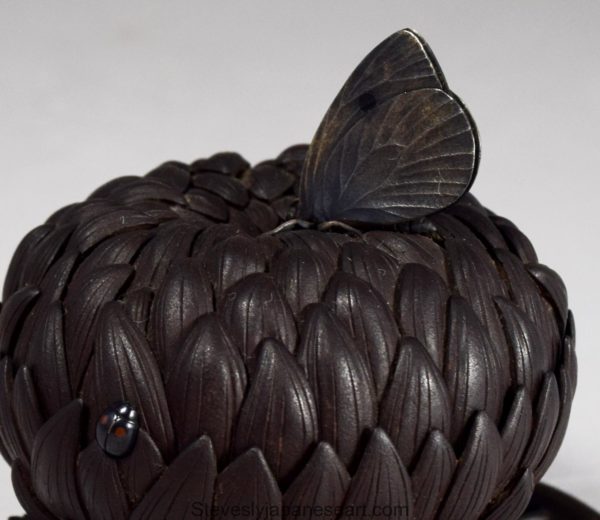 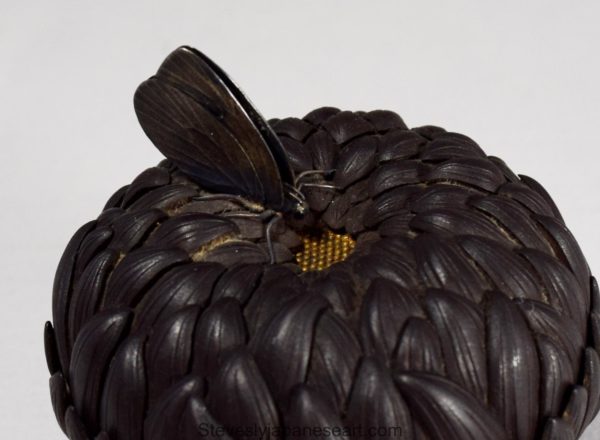 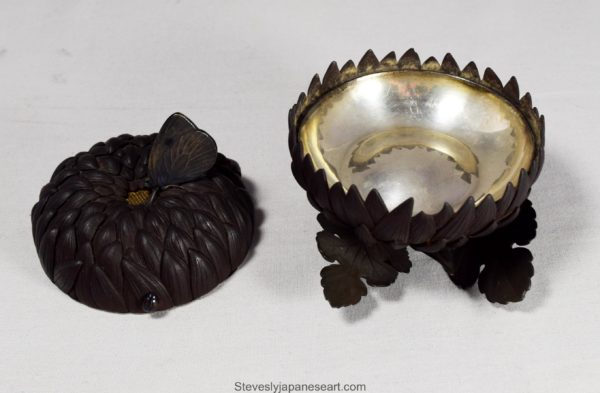 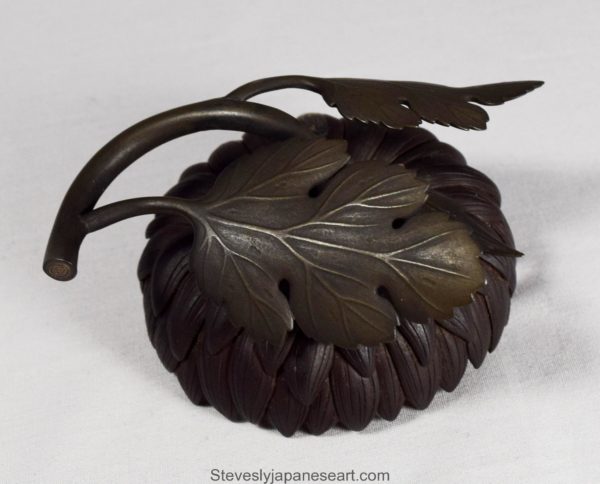 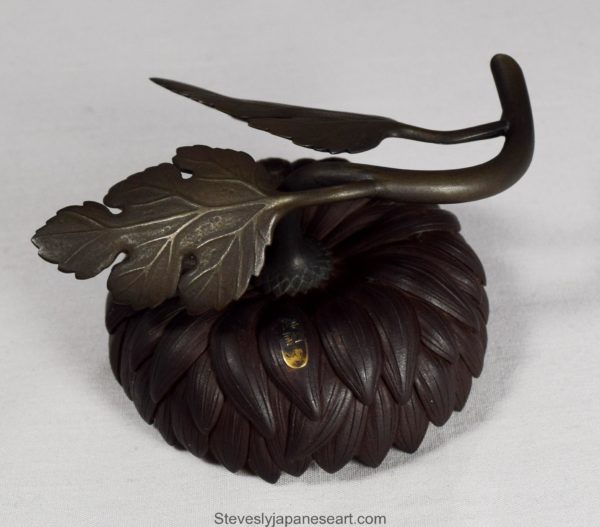 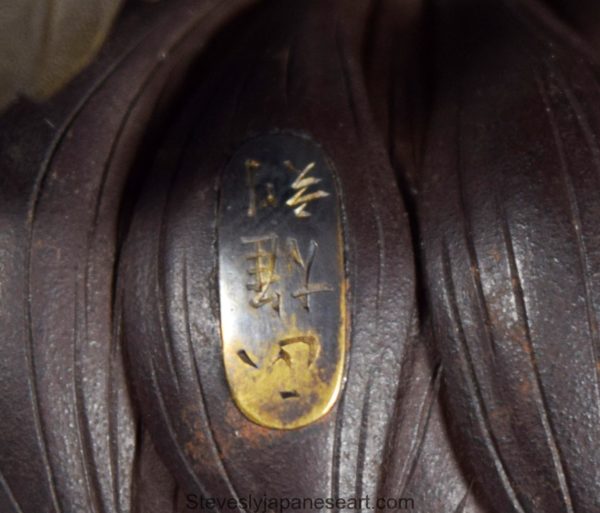 As part of our Japanese works of art collection we are delighted to offer this exceptional Meji period carved Iron Kogo by the highly regarded metal artist Ishii Masao (circa 1840 -1920), Stylistically speaking the Kogo is crafted in the manner of the famed metal craftsman Shoami Katsuyoshi (1832-1908), the adornments of the Kogo are the chrysanthemum (Kiku in Japanese, one of the “Four Gentlemen” known as Shikun in Japanese), a butterfly (Cho in Japanese, the insect that changes its form from an egg to the fully fledged butterfly, and symbolizes the transmigration of soul of the samurai –the Emblem of the Taira Clan), and the ladybird (Tento-mushi in Japanese, which literally means “Insect of Heaven’s Way”, the insect flies to the sky, and might indicate that the government is ruled by the mandate of Heaven).  The engraving technique is superb and refined, deploying three dimensional Sukidashi-Bori (the body is carved away to leave the raised design), Takanikubori (high relief carving), and kata-bori metal crafting methods to an amazing degree, this highly prized Japanese work of art is signed Masao Koku (carved by Masao) in a seal to the underside.

NOTES: The metal artist Ishii Masao is listed on page 368 in the book Toso Kinko Jiten, he was a student of Kano Natsuo (1828-1898) and later Masao studied under Unno Shomin (1844-1915); both Natsuo and Shomin were appointed as Imperial Household Craftsmen, and professors at the Tokyo University of Fine Arts, according to Wakayama Takeshi’s book Kinko Toso Jiten there are several known works by Ishii Masao; made in shibuichi and bronze alloys with motifs of peaches, potatoes, hares, pheasants etc, he lived in Shimogaya-ku district Tokyo Active during the Meiji and Taisho periods.

In Meiji 23, Ishii Masao was invited by the Gyokusendo Studio to assist with technical expertise, the studio was founded in 1816, and exhibited inland and abroad, and it was during the third generation that the studio made a quantum leap by progressing from artisan craftwork to fine art with the help of Ishii Masao as a guest technician, the current master is the 7th generation in the family business and his name is Motoyuki Gyokusen.

Provenance: This Kogo was amongst a small but high quality group of Japanese items bequeathed to a UK boarding school in the early 20th century by a former pupil , remarkably the goods remained in the headmasters office for many decades until 2014 when the current committee decided to sell the items to fund the further education of a group of female pupils, please see our other items from that collection.

The condition is stunning.