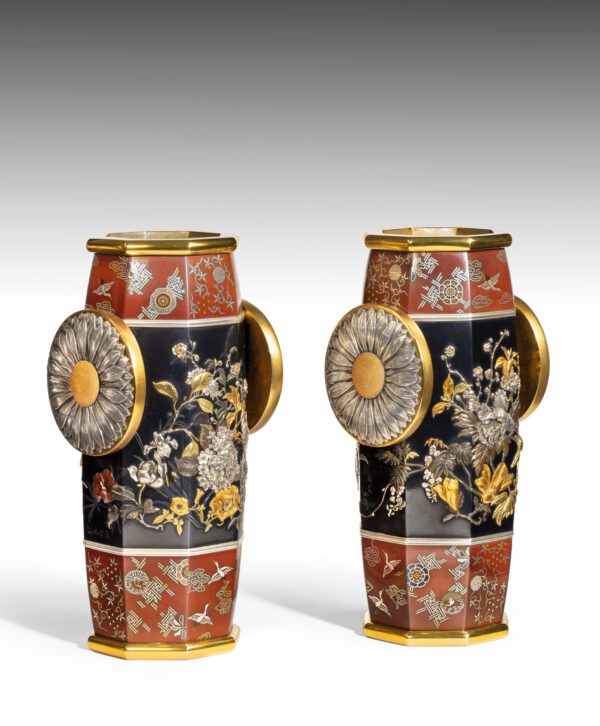 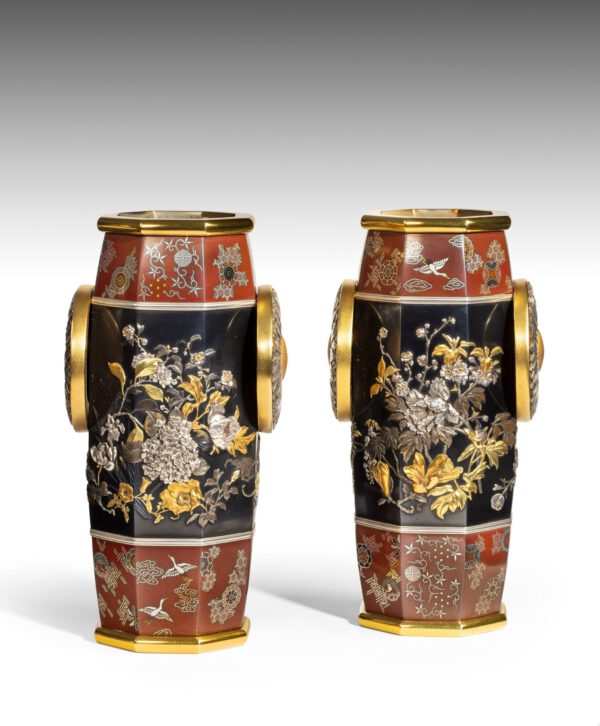 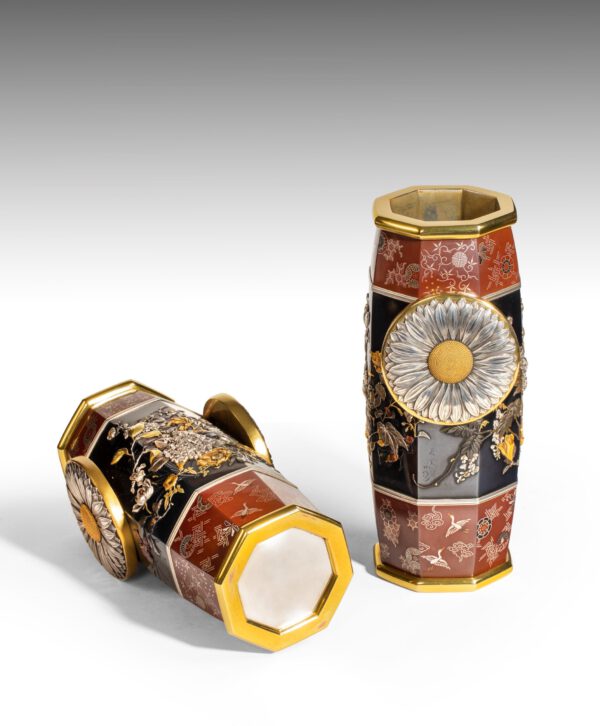 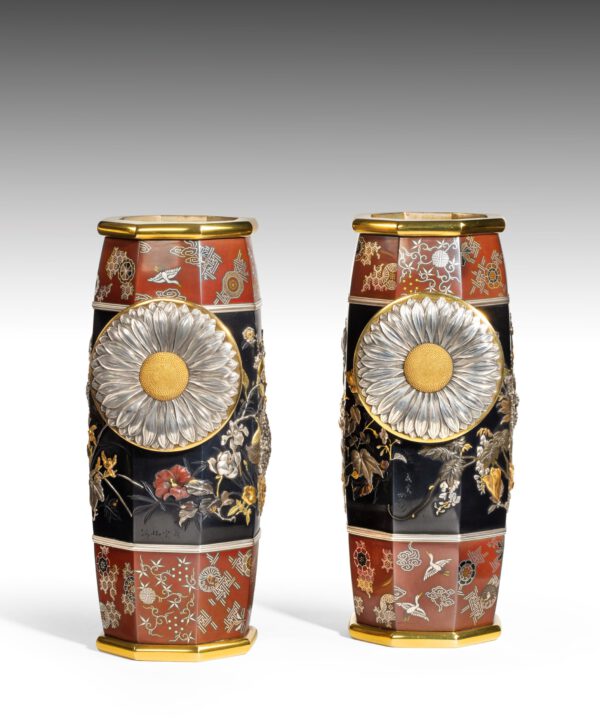 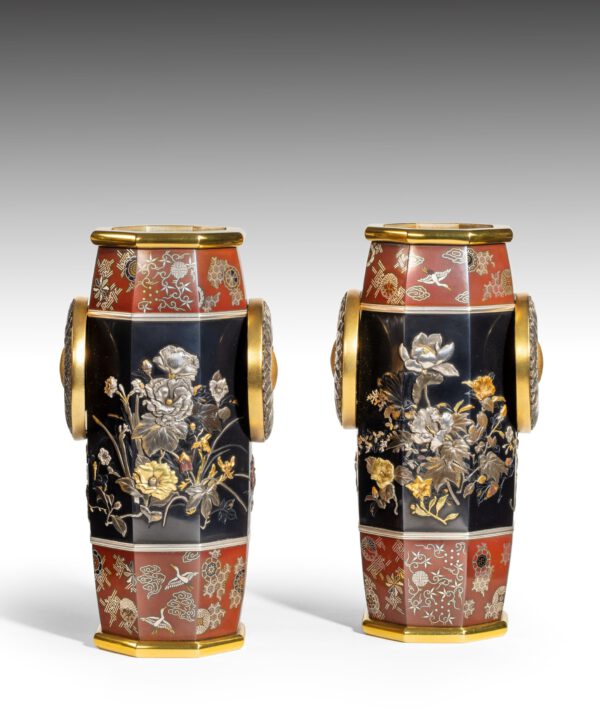 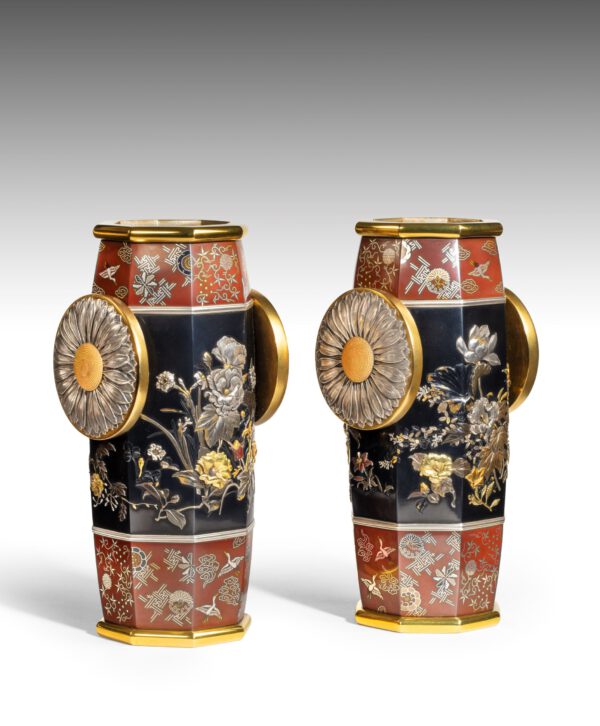 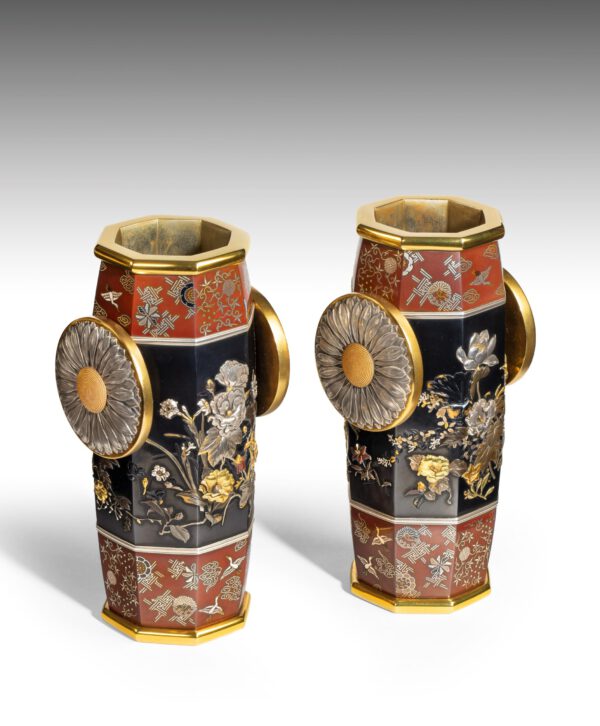 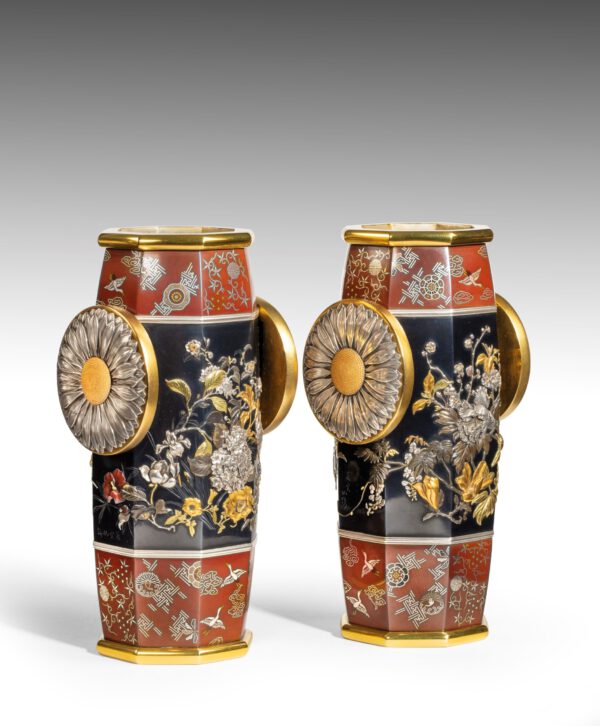 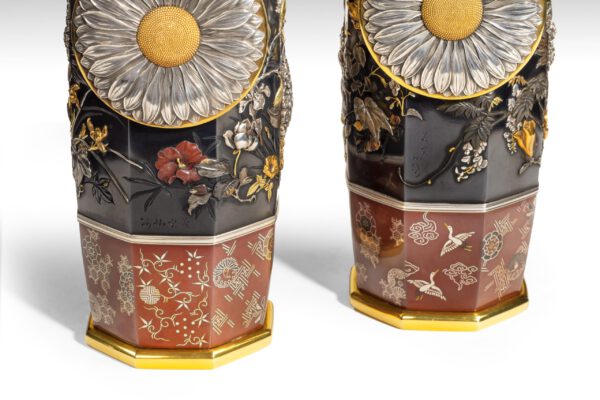 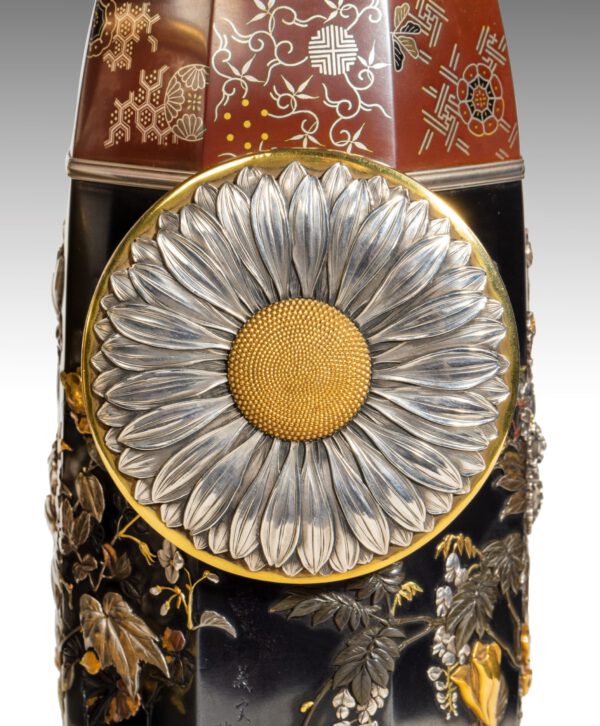 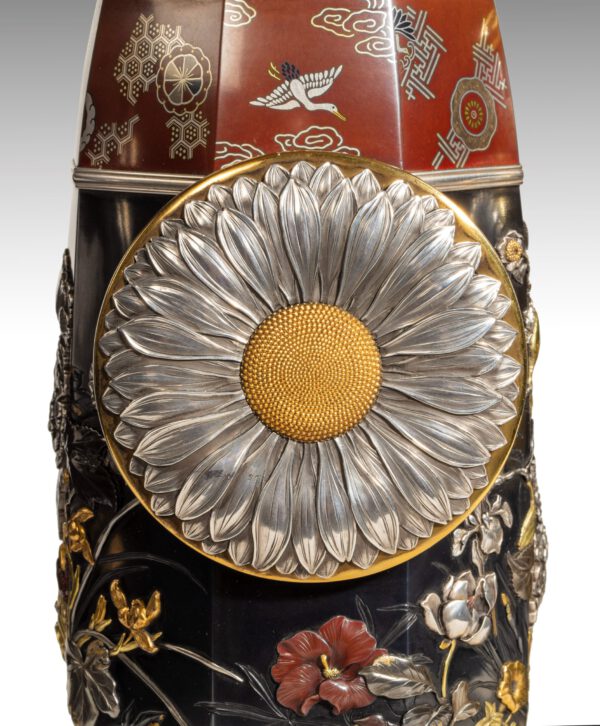 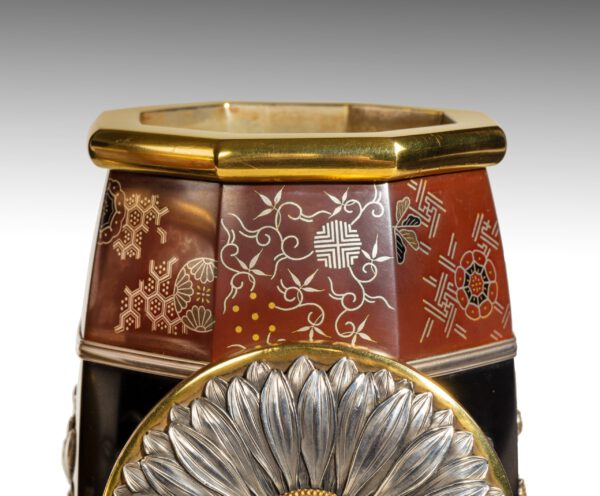 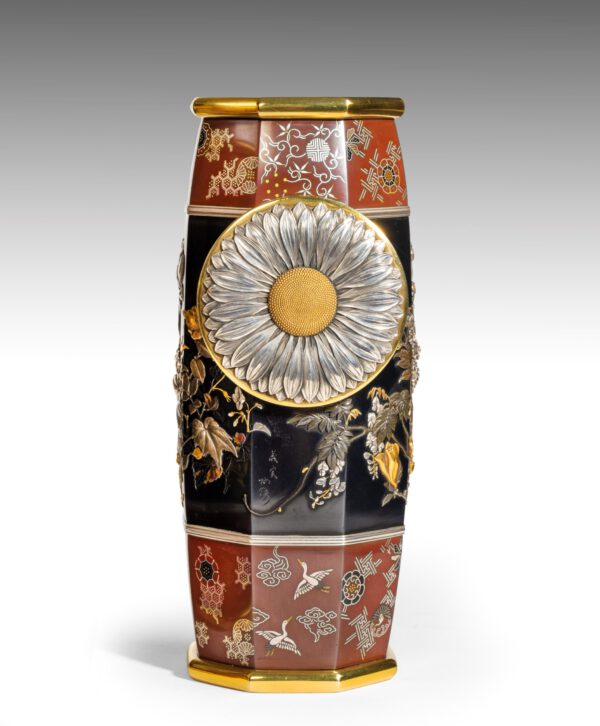 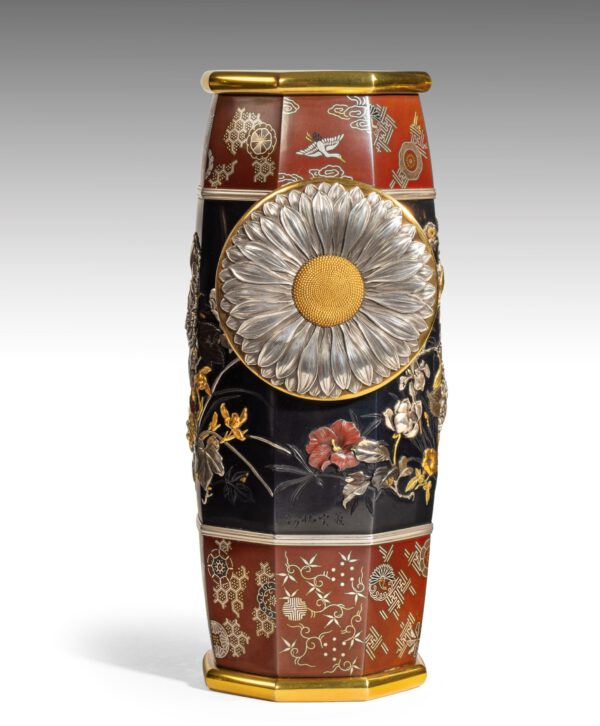 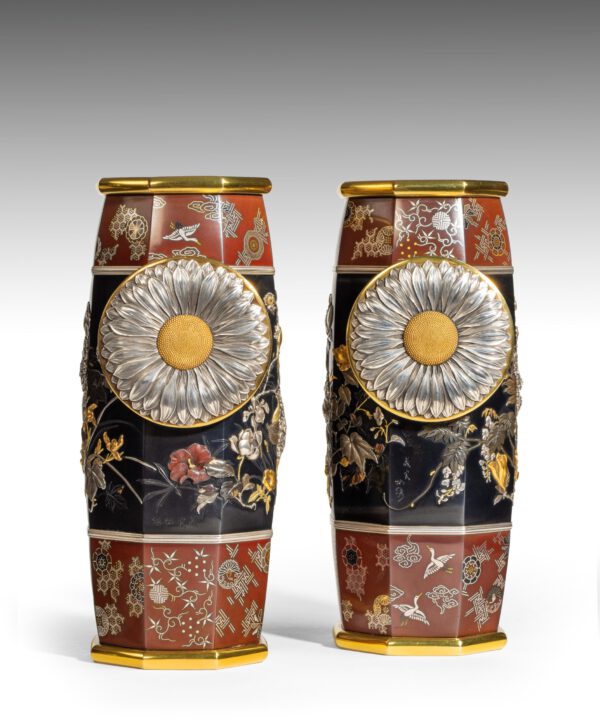 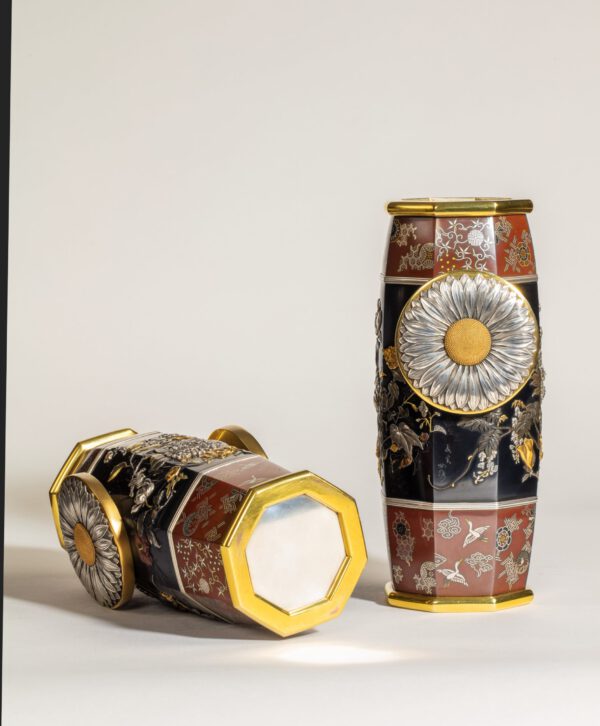 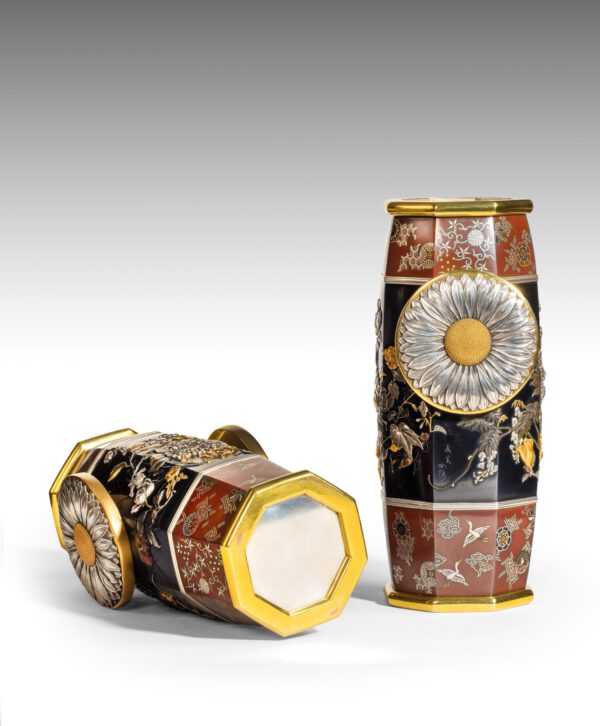 As part of our Japanese works of art collection we are delighted to offer this incredibly rare pair of Meiji period 1868-1912 mixed metal vases manufactured by the son of the most highly revered Japanese metalworker Shoami Katsuyoshi (1831-1908) , his son Nakagawa Yoshizane (1859-1915) has fully signed these unusual form vases, the hexagonal bodies hand beaten predominately from shakudo and copper, the shakudo section finely onlaid with native flora whilst the copper sections have been inlaid to an exceptional standard, a tour de force of inlaid detailing using flattened silver wire to form geometric patterns interspersed with birds in flight, the most unusual feature being the huge chrysanthemum form mons appearing as wheels to each side of the vases, each painstakingly and individually hand formed to match almost to perfection , each of the petals chiseled from silver with the central gold stamen punched out in remarkable symmetrical detail, the underside unusually finished with solid silver bases, each vase signed to the shakudo central section by a very important Meiji period metalworker .

A silver and mixed metal elephant resembling the Shoami Katsuyoshi elephant in the Nasser D Khalili collection , Metalwork I , plate 8 , resides at my home town museum, The Russell Cotes in Bournemouth, as part of a collection of Japanese metalwork collected by Sir Merton and lady Russell Cotes during a trip to the far east in 1884, it is evident that Yoshizane was taking inspiration from his father at this particular time, following his fathers death in 1908 Yoshizane is recorded as having finished an iron and mixed metal vase on behalf of his father, the item now jointly signed by father and son .

Having learnt his skills and followed in the footsteps of his father arguably the greatest ever metalworker of the Meiji period,  you have to wonder if Yoshizane was expressing a new found freedom when he designed and manufactured these unusual vases,  perhaps they were made for exhibition or maybe they were a special commission from a senior military official, it is possible they may have taken their unusual form from the lines of a Samurai matchlock or cannon .