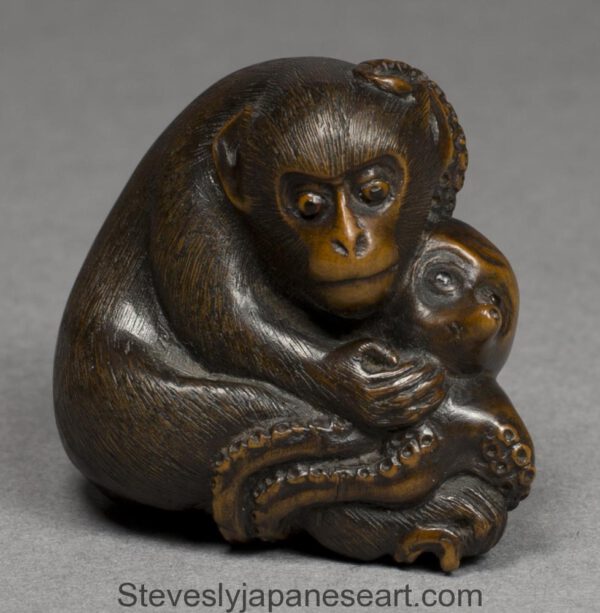 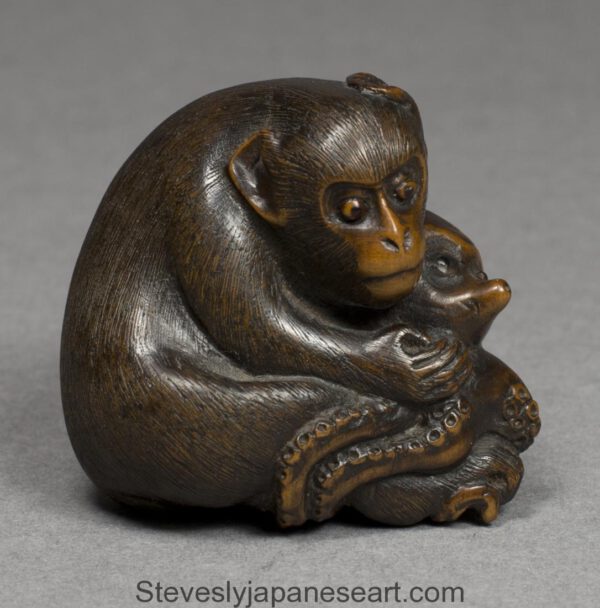 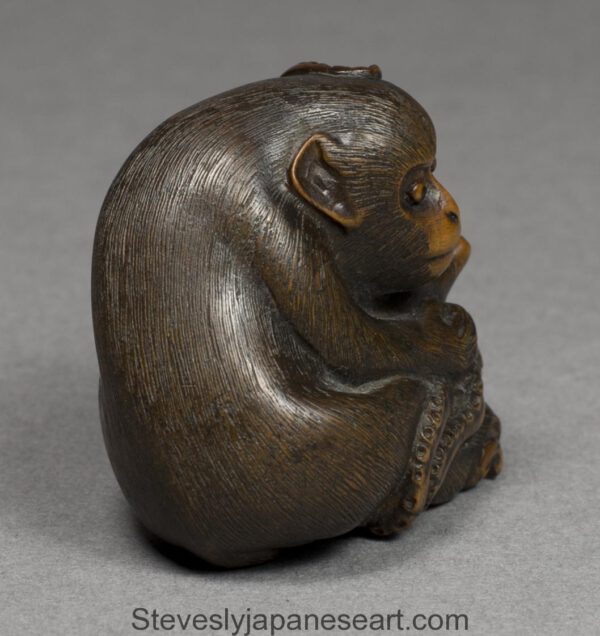 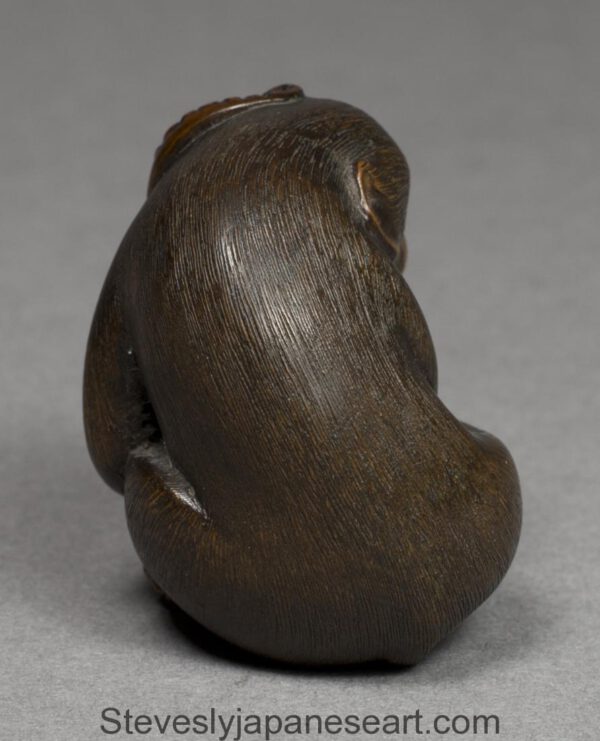 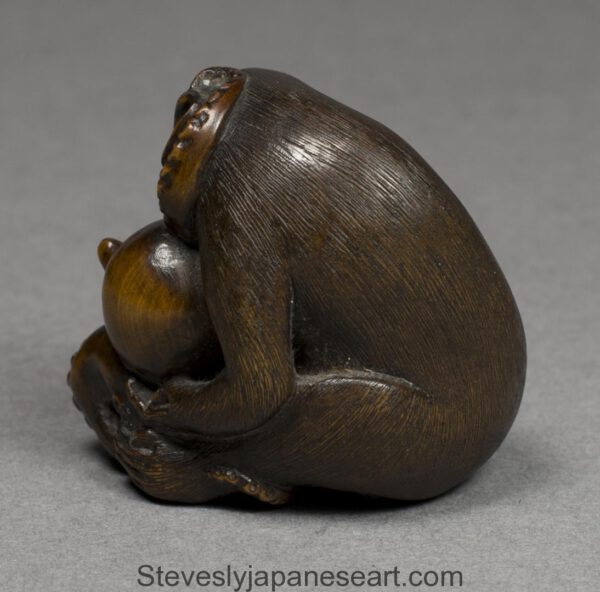 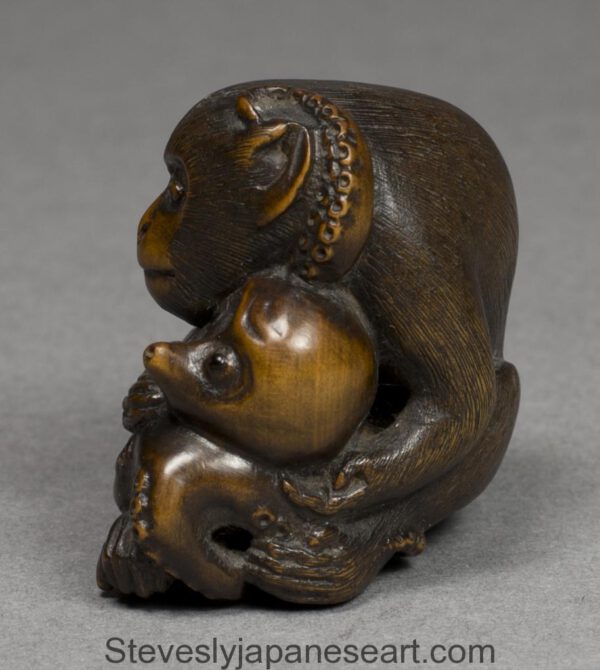 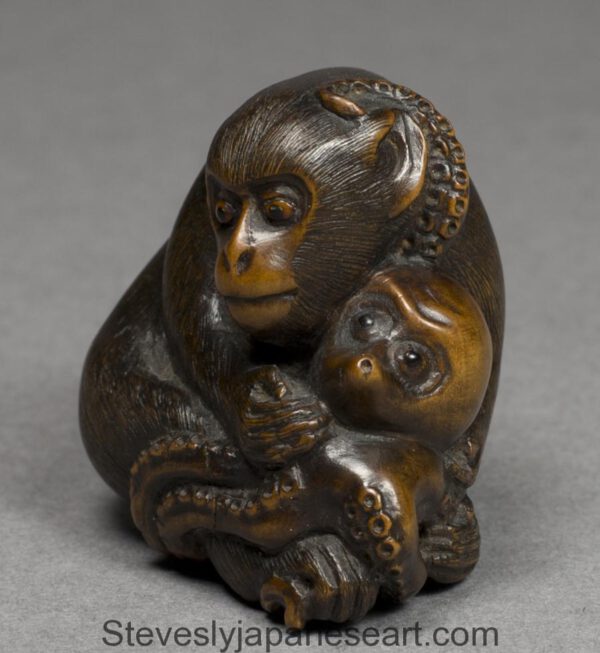 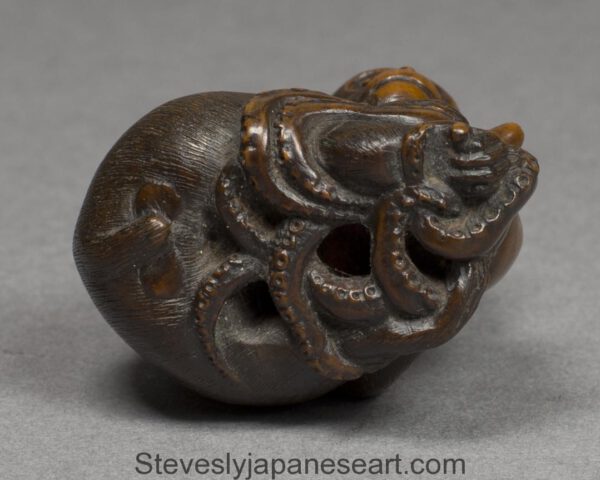 As part of our Japanese works of art collection we are delighted to offer this Japanese Meiji period (1868-1912) circa: 1880 carved Wood Netsuke depicting a Monkey in an embrace with an octopus, the monkey is seated with both feet and both arms wrapped around the octopus as if to restrain him, the octopus has one of its tentacles wrapped up upon the monkeys head, the eyes of both species are inlaid with black horn, this particular subject is representative of an interesting Japanese mythical story , see notes below , a great addition to your Japanese works of art collection, another Netsuke direct to ourselves from a high quality UK collection .

In Japanese mythology the Octopus is attributed to have great healing powers, while the monkey is often portrayed as a clever imp, this netsuke illustrates a famous episode in which the two meet. Ryujin, the Dragon King of the Sea, calls upon his physician, an octopus , to attend to his daughter who has taken ill, the Octopus prescribes the liver of a Monkey as a remedy, according to the legend, the Octopus dispatches his rival, a Jellyfish (who at the time had bones and a carapace, much like a Tortoise) to capture a Monkey. The jellyfish obliges, but en route back to the King, the Monkey persuades the Jellyfish that he didn’t have his liver on him at the moment, but if they could return to the shore, they could surely retrieve it. The Monkey escapes and when the Jellyfish returns to the palace, Ryujin soundly beats all of the bones out of the Jellyfish. This netsuke by-passes the role of the poor Jellyfish in the story, and instead shows the captured Monkey placing his handS on the tentacleS of the octopus as if to say, ‘oh no, I’m sorry I don’t have a liver at all’ while the Octopus-physician contemplates the monkey’s compelling claim !!