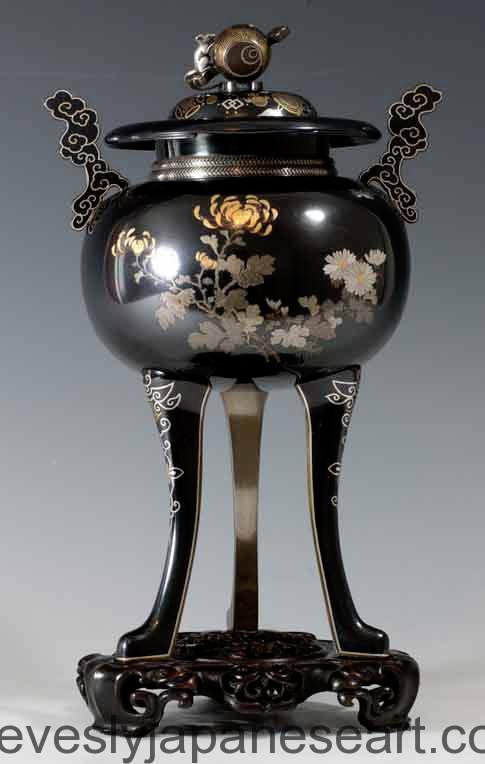 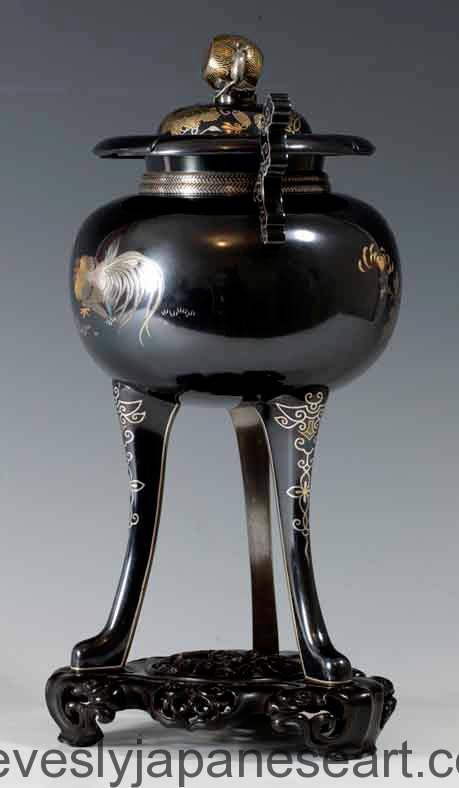 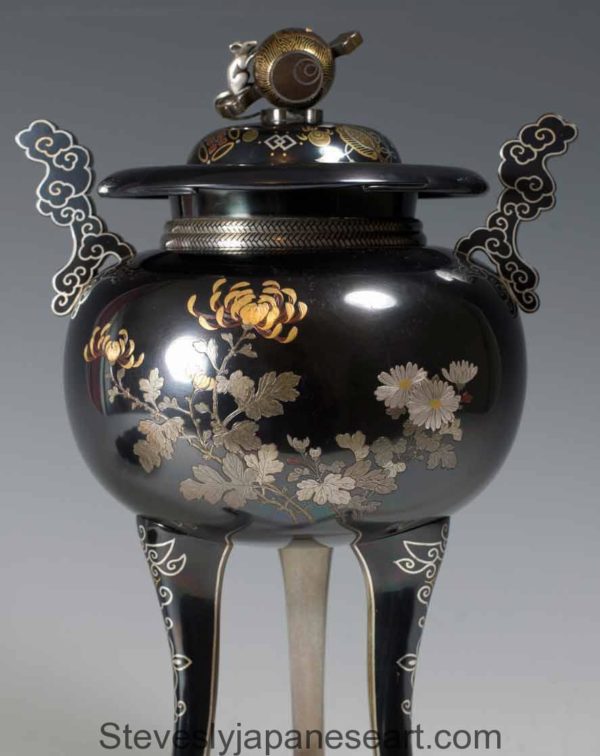 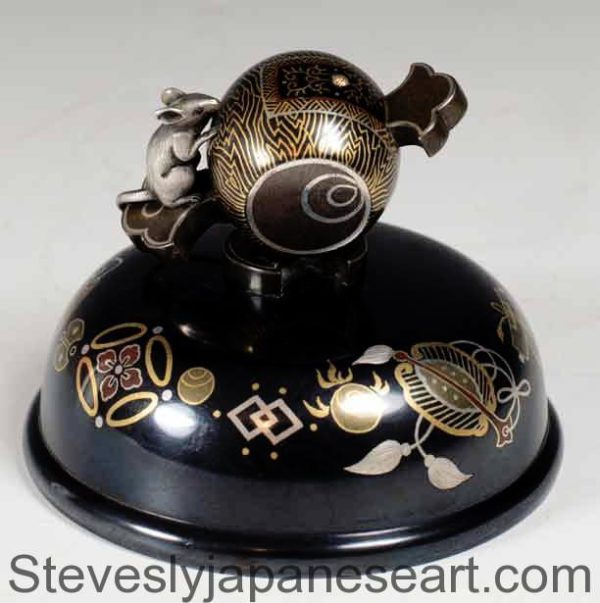 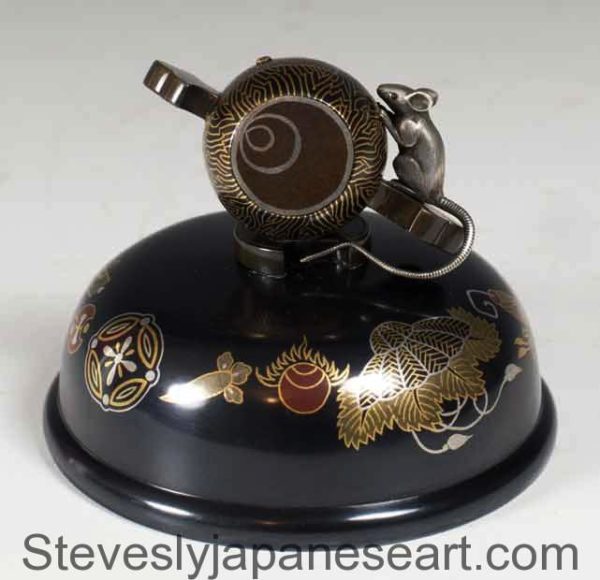 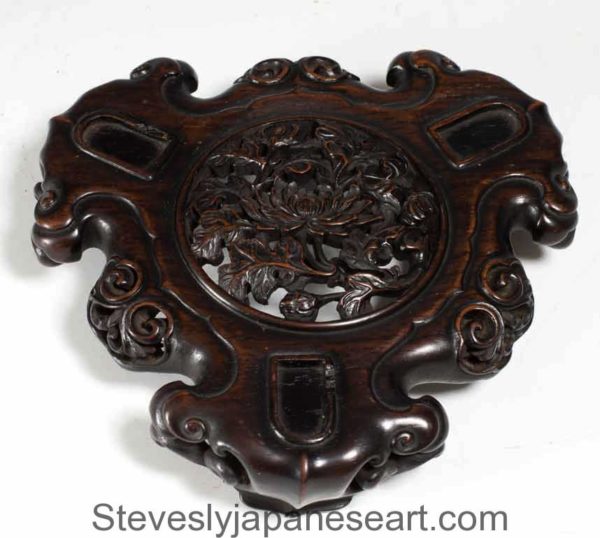 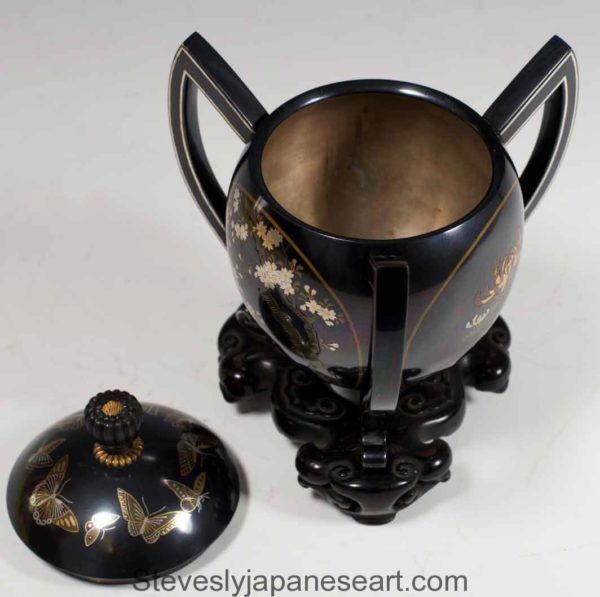 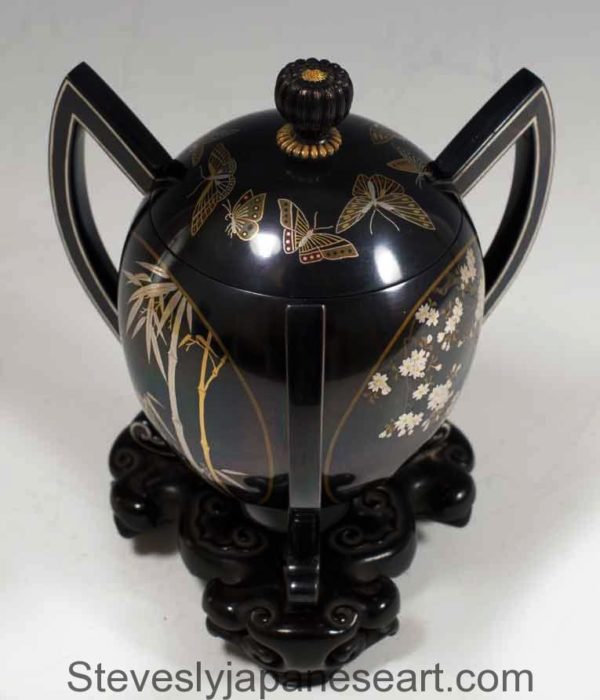 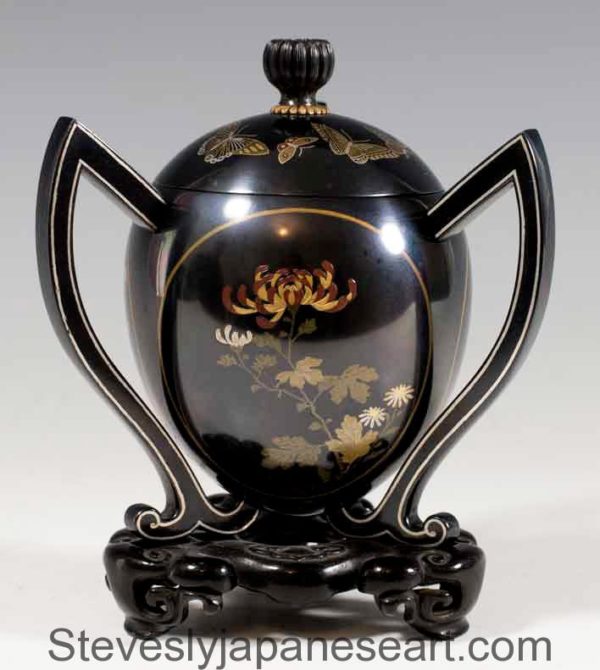 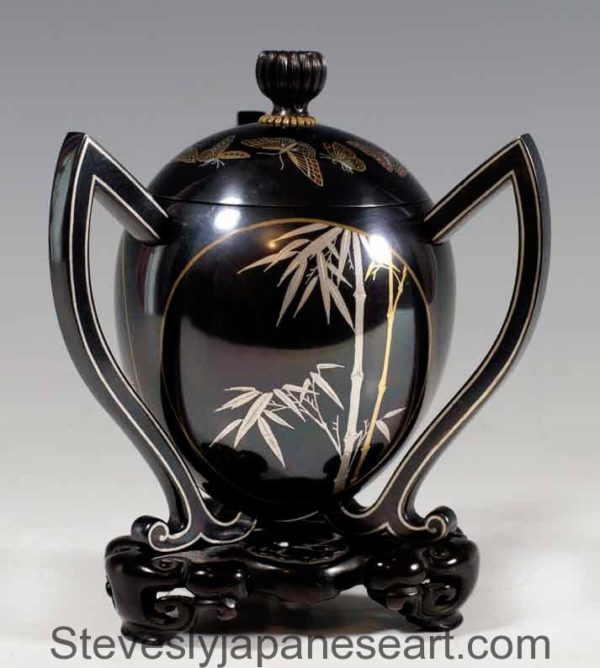 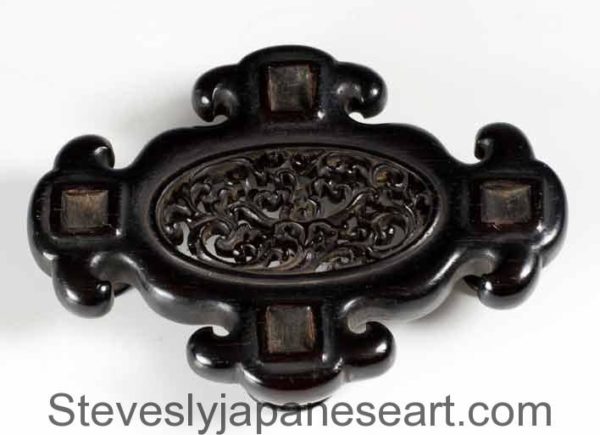 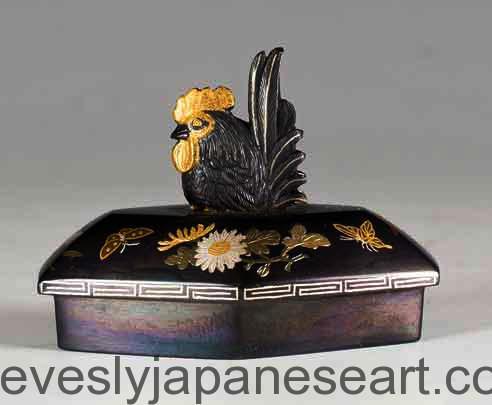 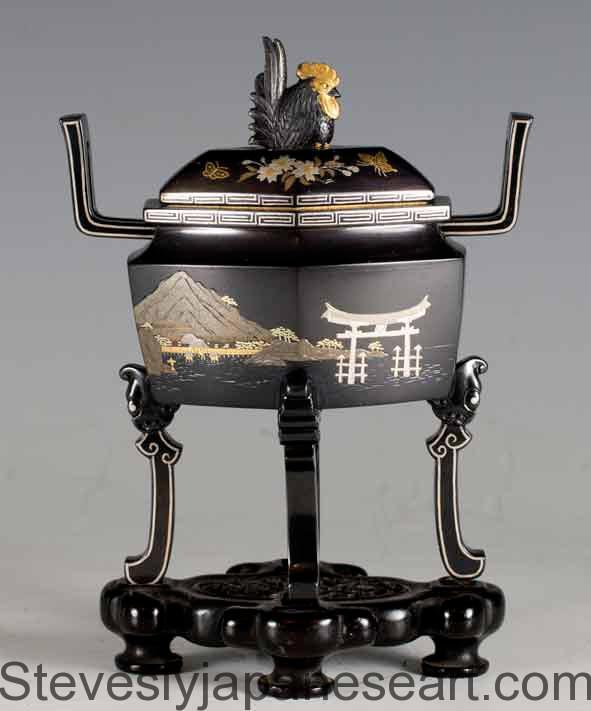 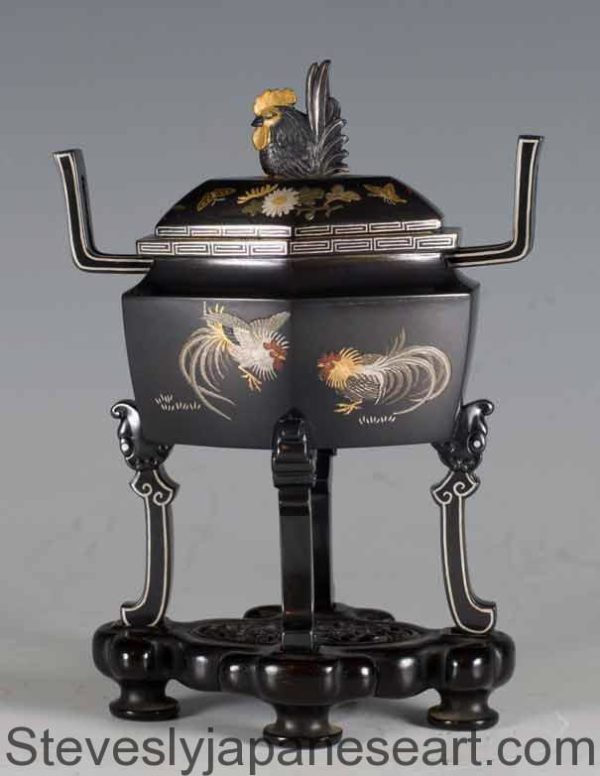 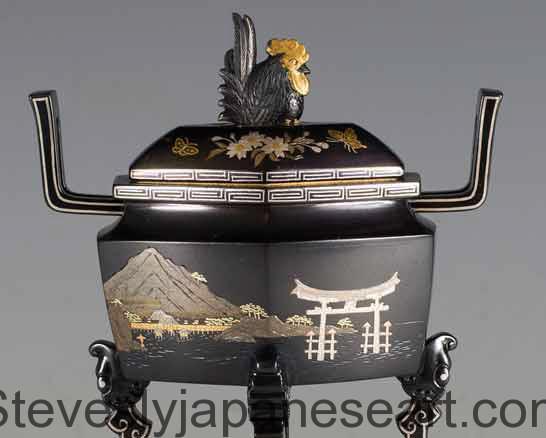 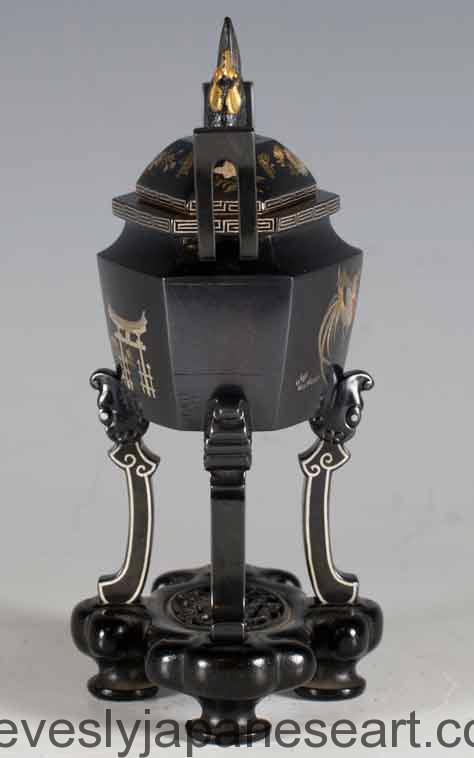 As part of our Japanese works of art collection we are delighted to bring you this magical large and high quality Meiji period 1868-1912 Koro on stand, artist signed and from the Nogawa company , the main body of this delightful stylish Koro is formed from solid Shakudo , an alloy perfected by the Japanese Swordsmiths in the 16th century by mixing Gold with bronze to reach the blue black patination so highly coveted throughout the centuries , the Koro is inlaid with Gold, silver and mixed alloys depicting a wonderful pair of Cockerels to one side and an exquisite floral display to the other , the tall slender legs are Silver inlaid, the stylised handles depicting auspicious thunder clouds are also silver inlaid , with further silver inlaid geometric banding to the upper body, the dome shaped heavy Shakudo lid is decorated with inlaid mixed metal fans and implements associated with the lucky Gods, further surmounted by a fantastic quality mixed metal finial depicting a Rat upon Daikoku’s mallet , this super Koro has survived since the Meiji Period with its original pierced and carved hardwood base intact, an absolute delight, and the largest of three solid Shakudo Koro from a single collection . Circa 1900.

The second is a most unusual shaped Koro, the main Egg shaped body of the Koro is formed from solid Shakudo, the three panels are inlaid in Gold, Silver and other mixed alloys and depict native flowers , Bamboo and Prunus Blossom, separating these panels are stylised handles further inlaid with silver banding , the dome shaped lid is finely inlaid with mixed metal butterflies and is topped of with an exquisite quality imperial Chrysanthemum, the Koro is Silver lined , artist signed and sealed by the Nogawa company and has managed to survive since the Meiji Period with its original pierced and shaped hardwood base, an absolute delight.

The third is this small but high quality Koro on stand, artist signed and from the Nogawa company , the delightful six sided Koro is formed from solid Shakudo inlaid with Gold, Silver and mixed alloys depicting a pair of Cockerels to one side and a mountainous village scene and temple gate to the other , the stylised legs and handles are further Silver inlaid ,with silver inlaid geometric banding to the body and lid, the lid is decorated with inlaid mixed metal flowers and butterflies, the finial a mixed metal Cockerel, this super little Koro has survived since the Meiji Period with its original pierced and carved hardwood base intact, an absolute delight, and the last of three solid Shakudo Koro from a single owner collection . Circa 1900.

The condition of all three Koro is exquisite .