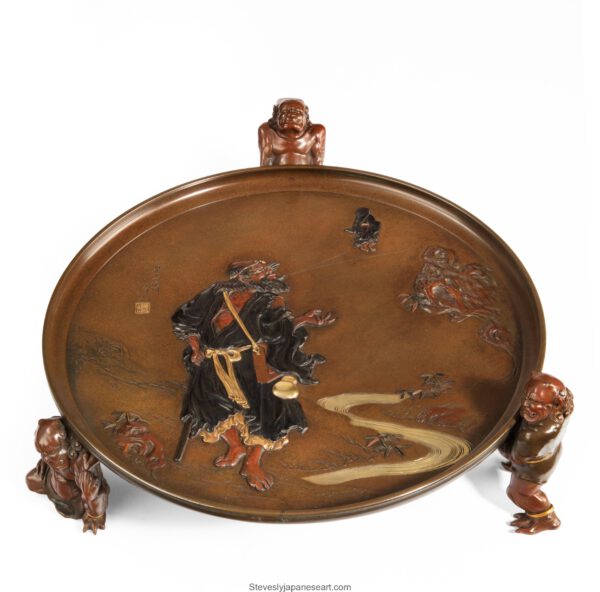 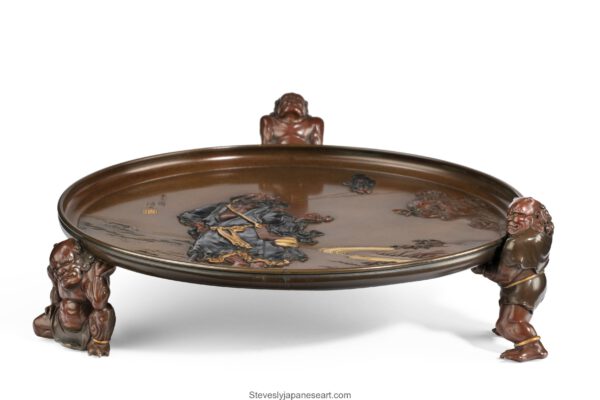 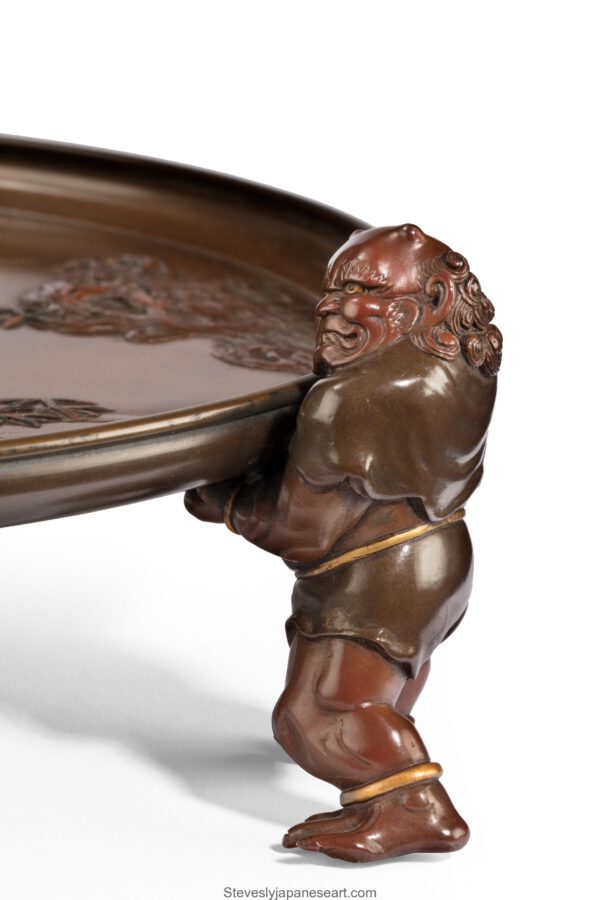 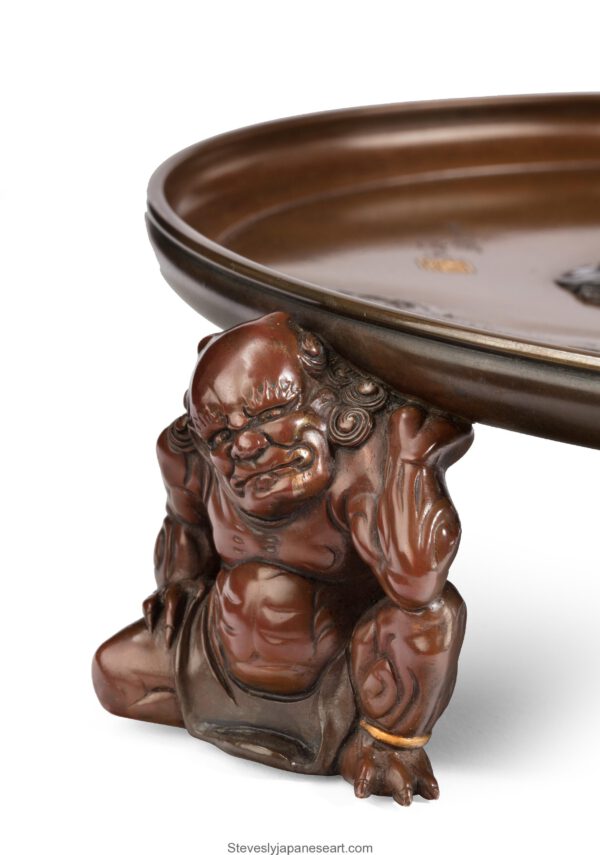 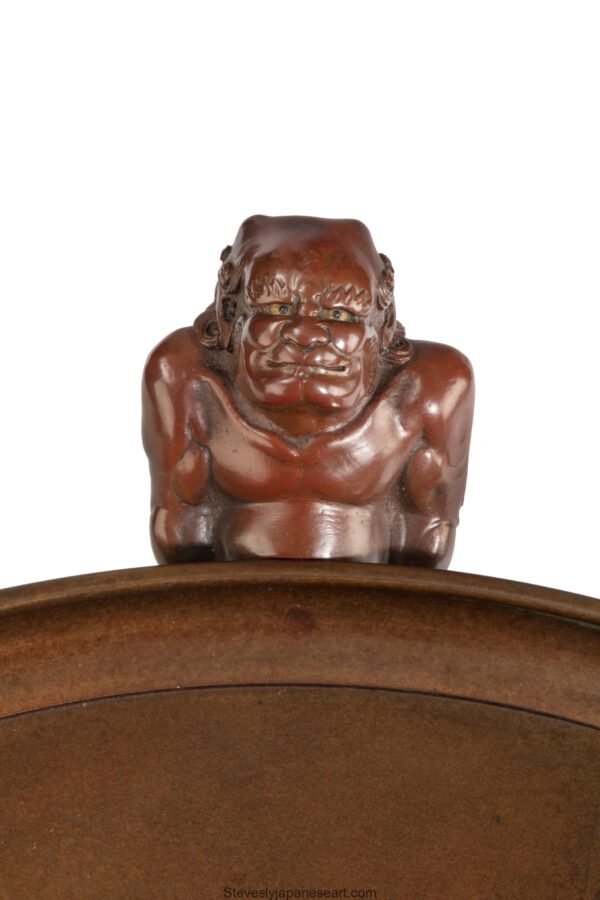 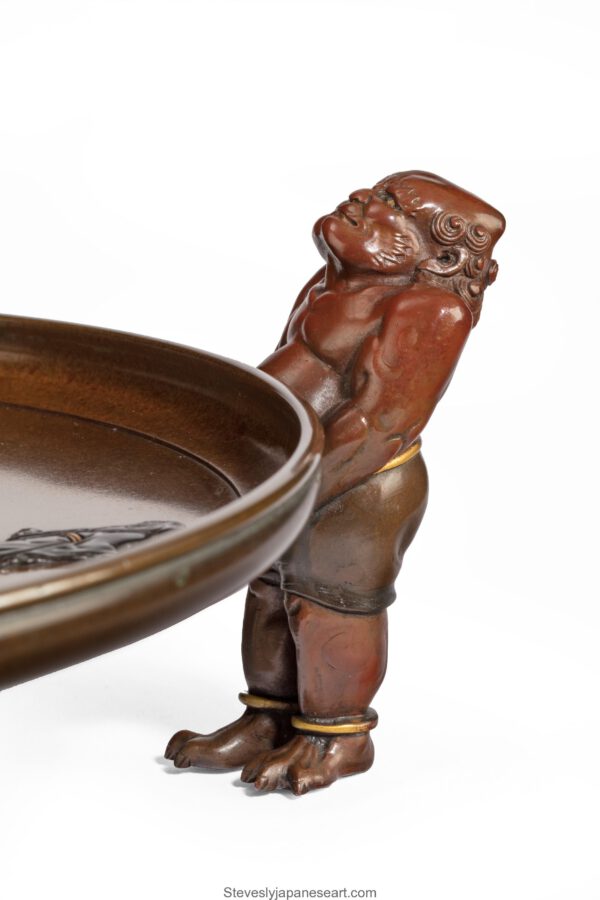 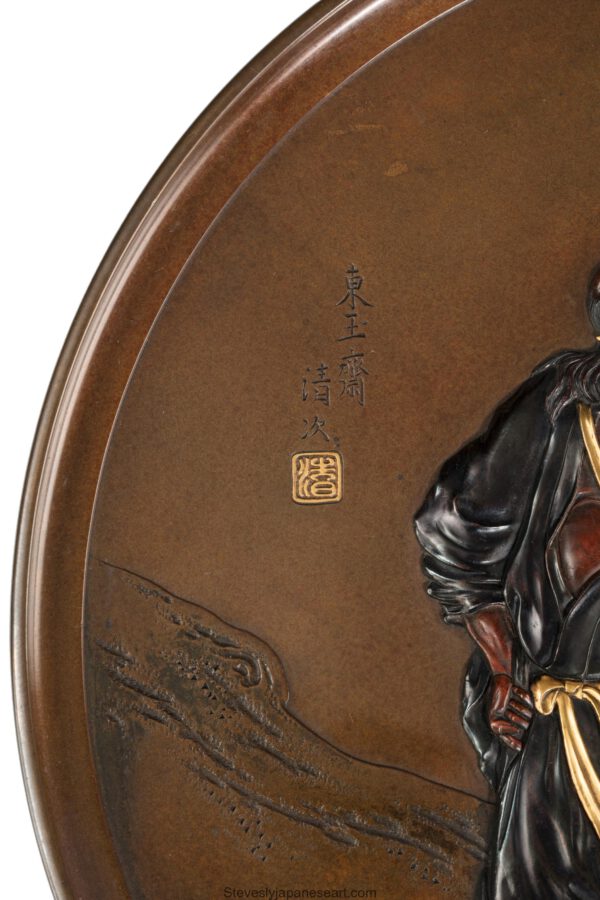 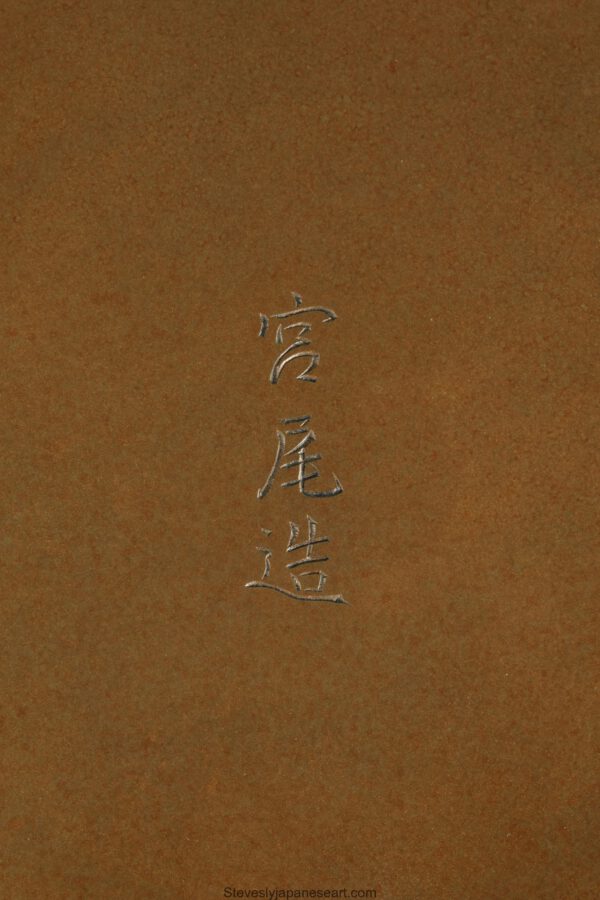 As part of our Japanese works of art collection we are delighted to offer this most unusual and high quality Meiji period 1868-1912,  onlaid mixed metal tray/dish , individually artist signed as a commission for the highly regarded Miyao Eisuke company , the delightful circular tray depicts one of the eight Daoist immortals Ri Tekkai (Li Tieguai in Chinese) as the main central character heavily onlaid in mixed metals , his coat formed from a deep black Shakudo with Gold Obi (sash) and trim , his Gourd and headband also Gilt highlighted while his body is formed from finely chiselled mixed bronze alloys, he stands beside a meandering river amidst a rocky landscape and appears to blow a figure into the distance , the tray is held aloft by three high quality mixed metal Oni depicted in various stances and with incredibly lifelike humorous facial expressions, this very unusual and high quality tray is nicely artist signed by a recorded Meiji period artist – Togyokusai Kiyotsugu, with the seal “Kiyo” , the underside simply signed Miyao Zo ( Made by the Miyao company ) .

Li Tieguai, also known as Tieguai Li (lit. “Iron Crutch Li”), is a mythical figure and one of the eight immortals in the Taoist pantheon. He is sometimes described as irascible and ill-tempered, but also benevolent to the poor, sick and the needy, whose suffering he alleviates with special medicine from his Gourd, he is often portrayed as an ugly old man with dirty face, scraggy beard, and messy hair held by a golden band. He walks with the aid of an iron crutch and often has a gourd slung over his shoulder or held in his hand, he is depicted as a clown figure who descends to earth in the form of a beggar who uses his power to fight for the oppressed and needy .

The artist is known to have collaborated with the Miyao company , a work is recorded at Sothebys London salerooms in may 2007 , lot 960 (est : £15-20,000 ), and depicting a mixed metal moonflask with a Monkey as the subject matter .

Kiyotsugu is listed on page 393, in the book TOSO KINKO JITEN (Wakayama Takeshi): “A pupil of Takahashi Yoshitsugu. There are known works of kozuka, kogai, tsuba by him with the signature “Togyokusai Kiyotsugu zo kore” and “Togyokusai Kiyotsugu sei kore”. Active in Meiji 27 (1894). He lived in the Shiba district, Edo (Tokyo).

His ancestor lived and worked in Shiba district (Edo), and later generations were based in Higashi-matsuyama City, Saitama prefecture. His family had been engaged in metal crafting since the Edo period. The artist was originally called Ichikawa Chojiro, the family ran the metal-ware shop Jumonji-ya in Higashi-Matsuyama city. From the fourth generation onwards they adopted the studio name TōgyokusaI ; and there are Tōgyokusai I and Tōgyokusai II. The Ichikawa family made commission works for the wealthy clientele as well as supplying their art works to various department stores in Tokyo. Suzuki Kakō (better known as Suzuki Chokichi, who was later appointed an Imperial Craftsman, Teishitsu gigeiin : 1848-1919) is said to have initially studied with the Ichikawa metal family.

The tray is in superb condition throughout .

Free worldwide delivery and a certificate of authenticity included in the price of this item .