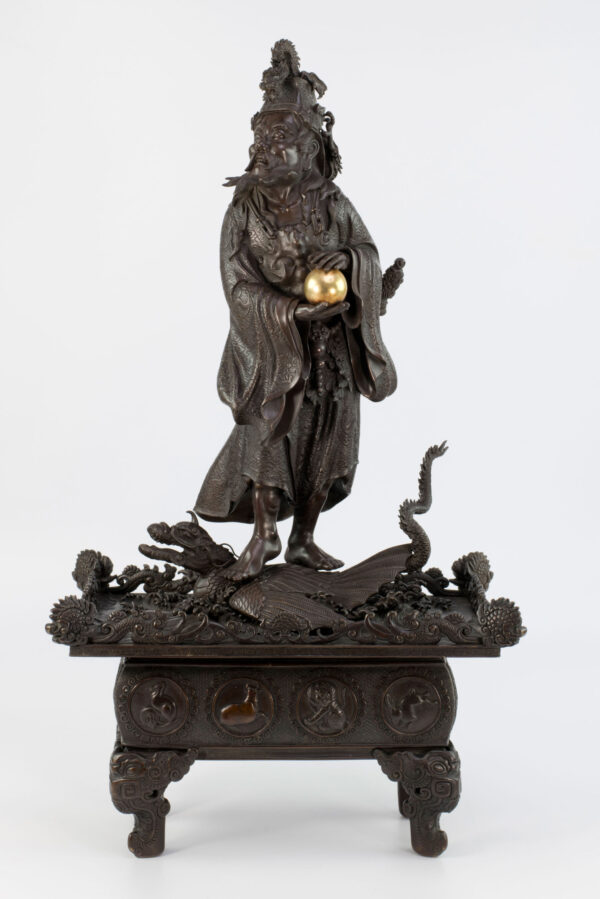 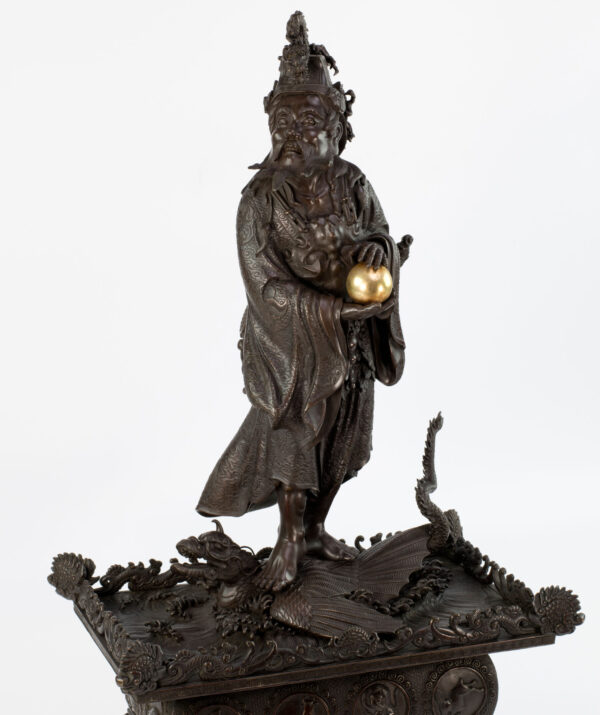 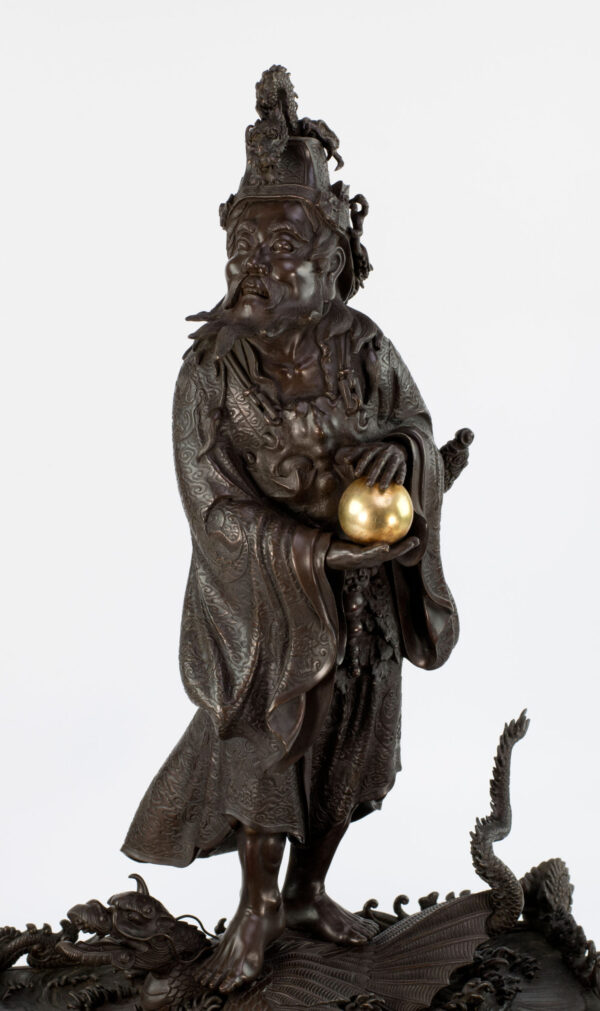 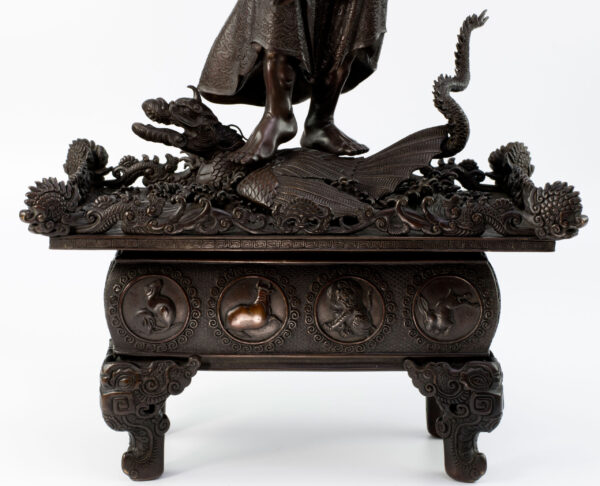 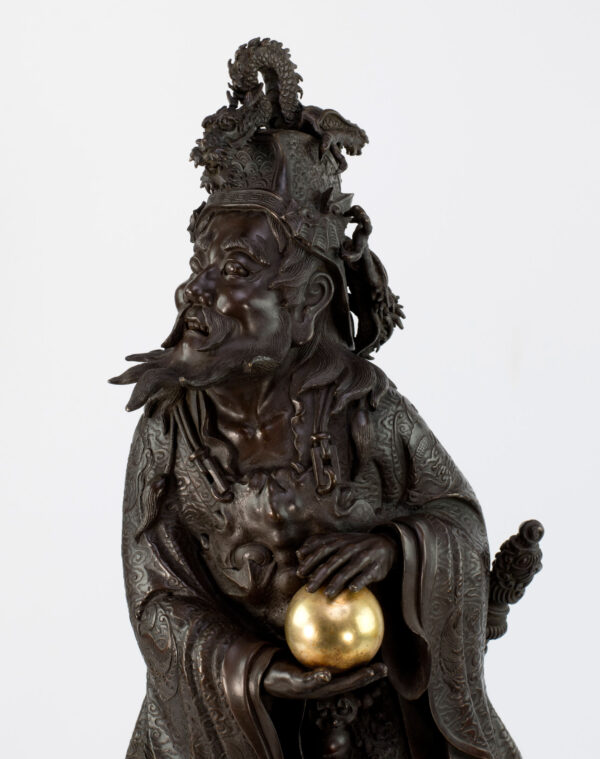 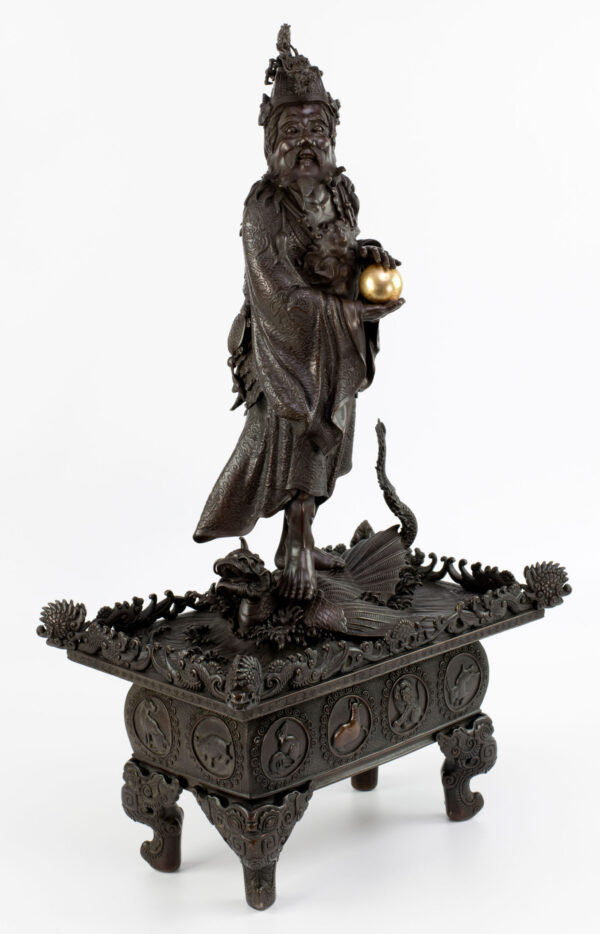 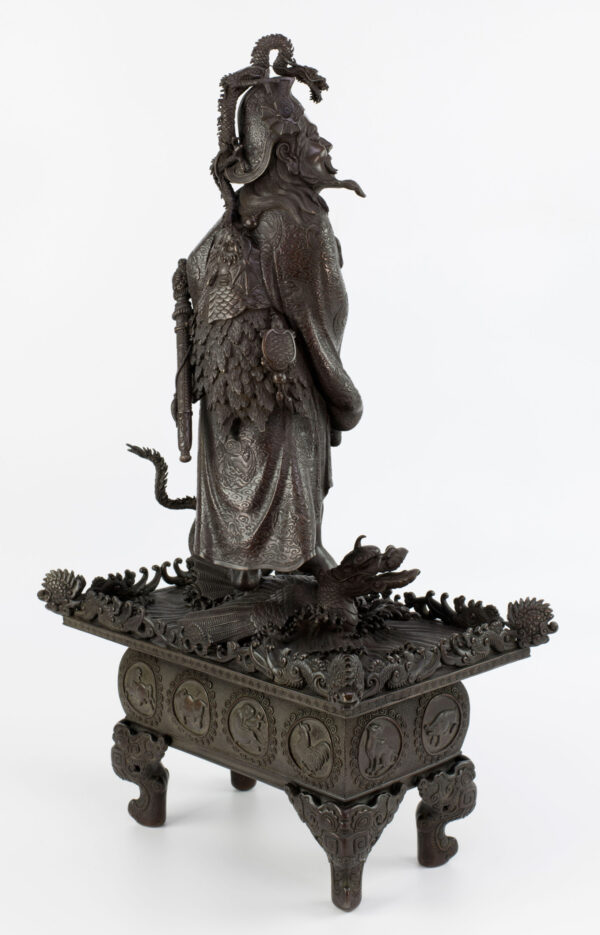 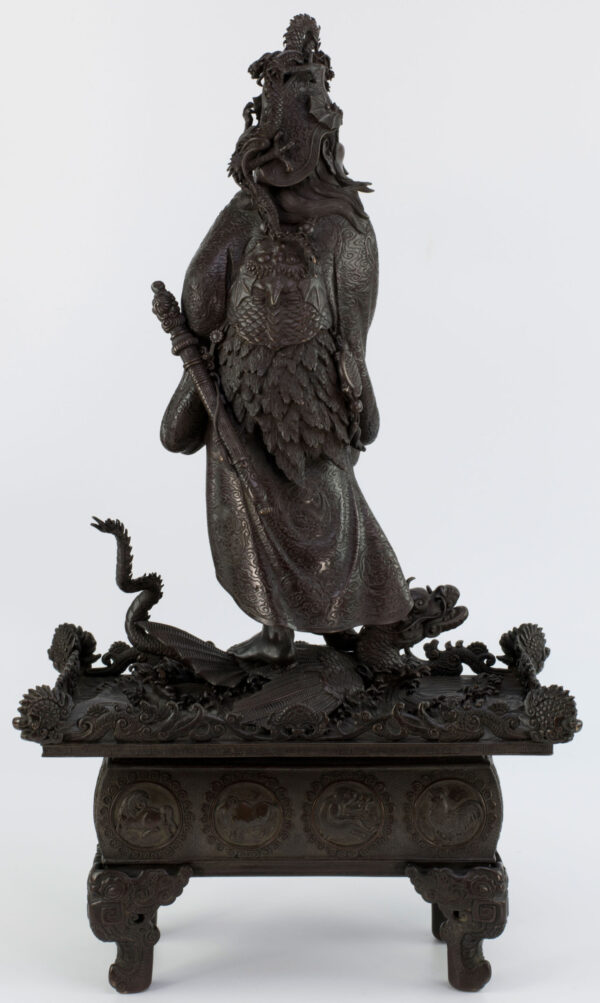 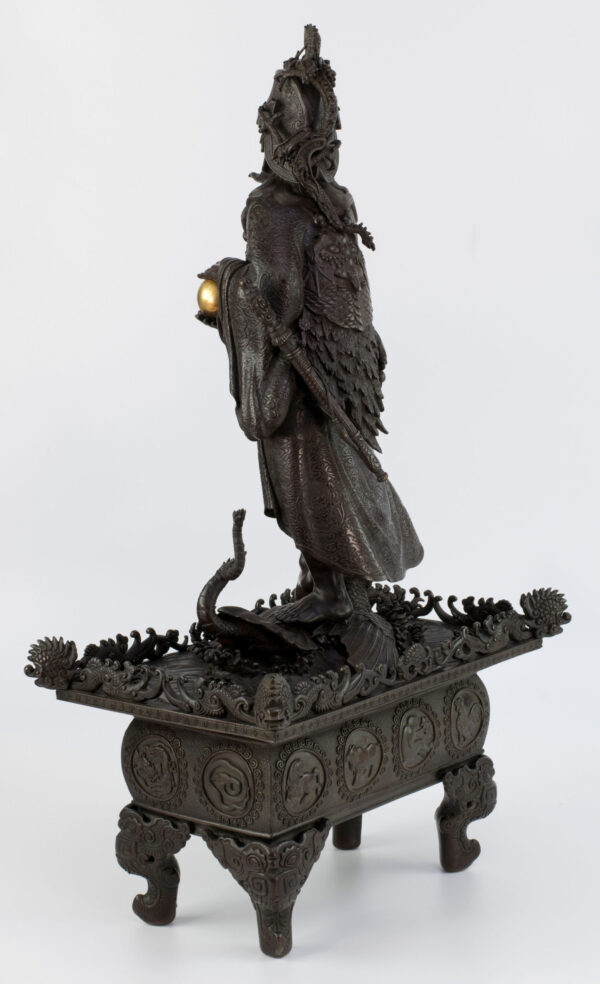 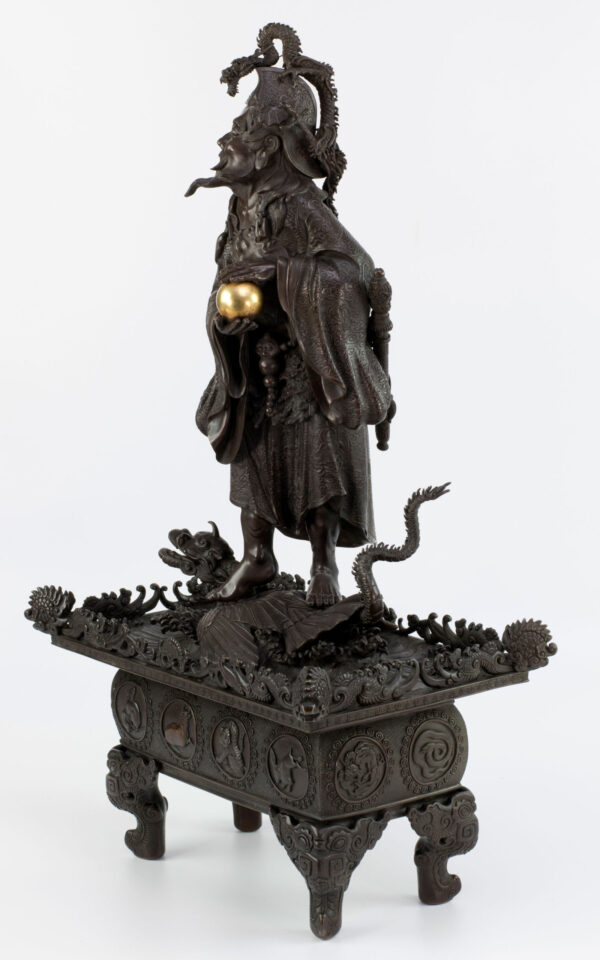 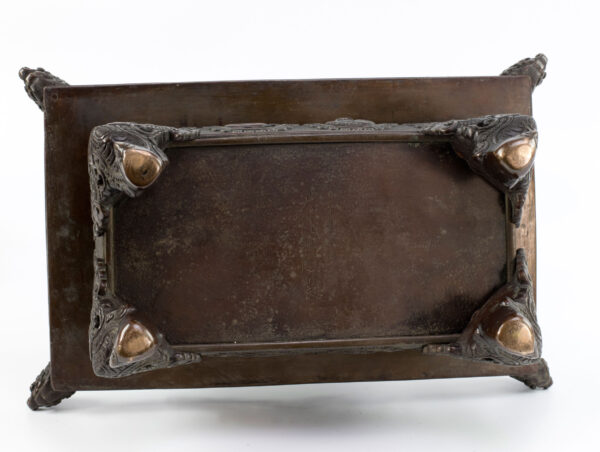 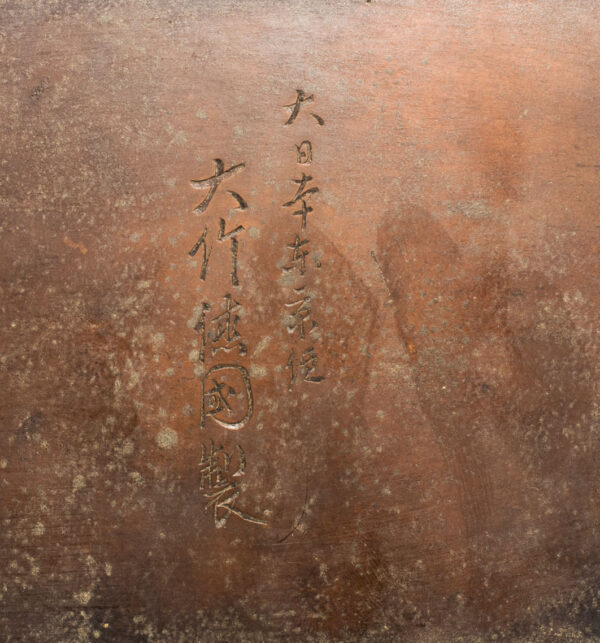 As part of our Japanese works of art collection we are delighted to offer this large and fine quality Meiji Period 1868-1912, cast bronze okimono depicting Ryujin Dragon King of the sea, this exceptionally finely cast bronze figure rests upon a Dragon Fish laid upon a rectangular base, the base itself stands upon mythical beast scroll feet , the frieze of the base decorated with animals of the zodiac to each of the four sides, with the corners of the base represented as rising birds, the tails forming the gallery. The highly regarded and well recorded artist has captured Ryujin holding a gilt Tama ( sacred jewel) whist standing bare foot upon a huge Dragon Fish, the imposing figure incredibly well cast and chiseled in fine detail particularly his facial features, flowing hair and elaborate robe, his helmet further surmounted with a writhing Dragon, the artist has fully signed this large and imposing piece to the underside of the base, it translates as: made in Tokyo great Japan by Otake Norikuni.

A great statement piece to add to your Japanese okimono collection or just to place as an impressive and interesting talking point in a room of your choice.

Otake Norikuni was one of a handful of luminary bronze casters of the late 19th century working alongside such leading lights as Oshima Joun at the Tokyo school of art and taking inspiration from master wood carvers such as Takamura Koun 1852-1934. NorikunI exhibited at many of the expositions of the period winning multiple medals for his breathtaking works, some of which can be found in the collections of Dr Nasser D khalili , in particular Vol II of metalwork, plate 98 depicts a very similar subject of a sea god presenting the jewel to Susanoo, a very similar study was also known to have been produced by Oshima Joun and others for the 1851 industrial exhibition.