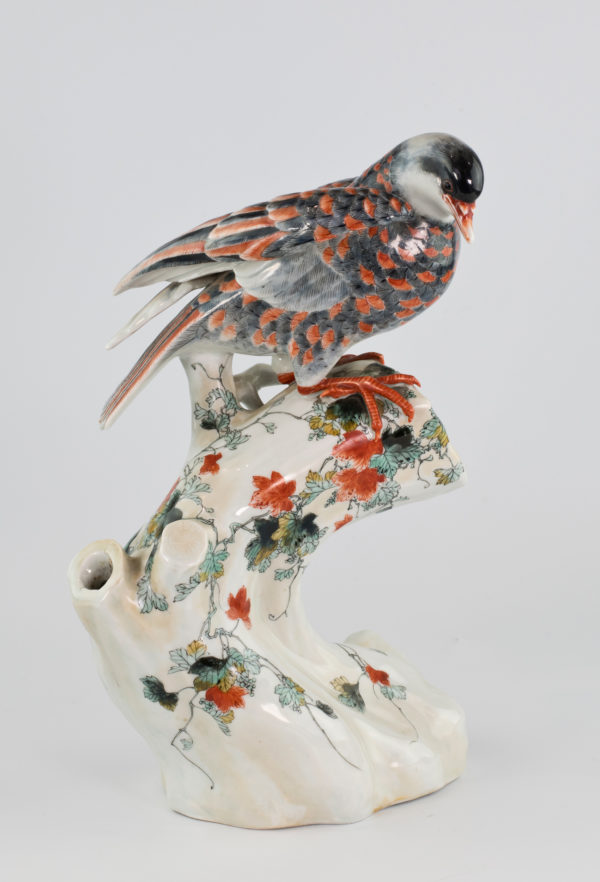 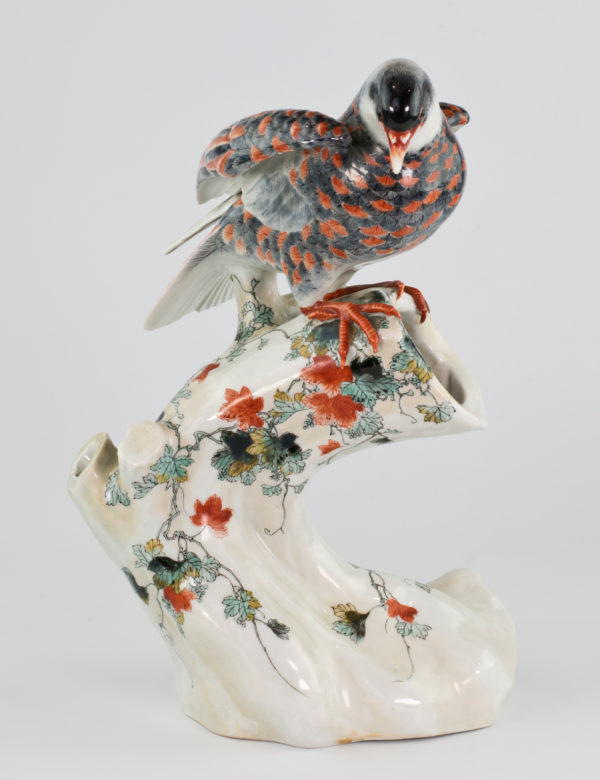 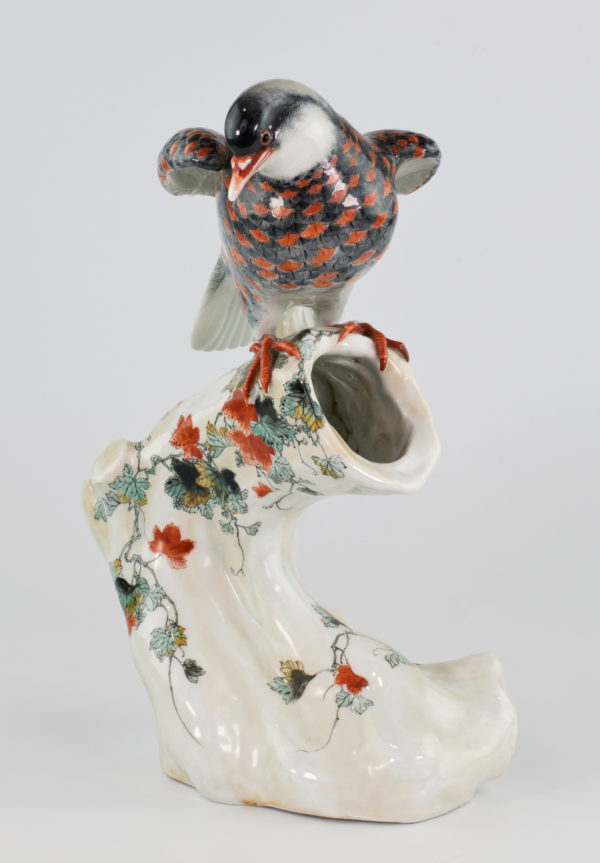 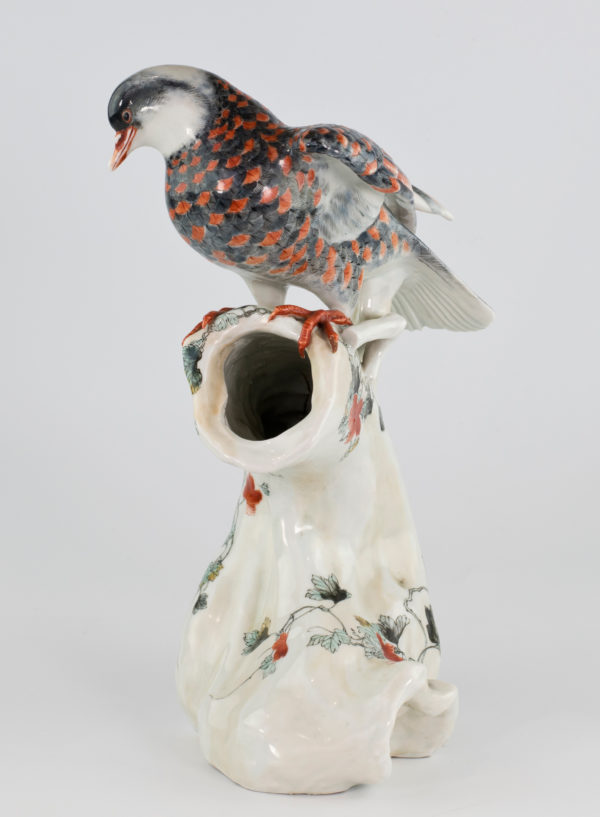 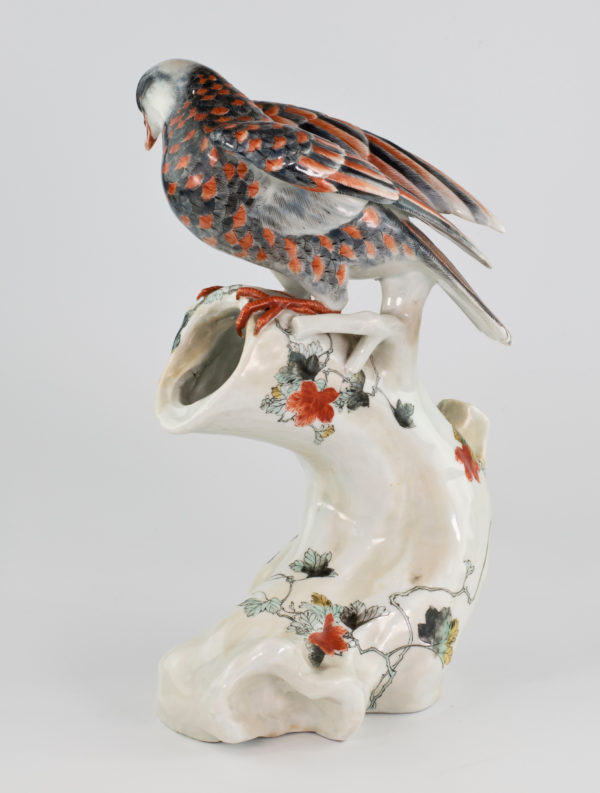 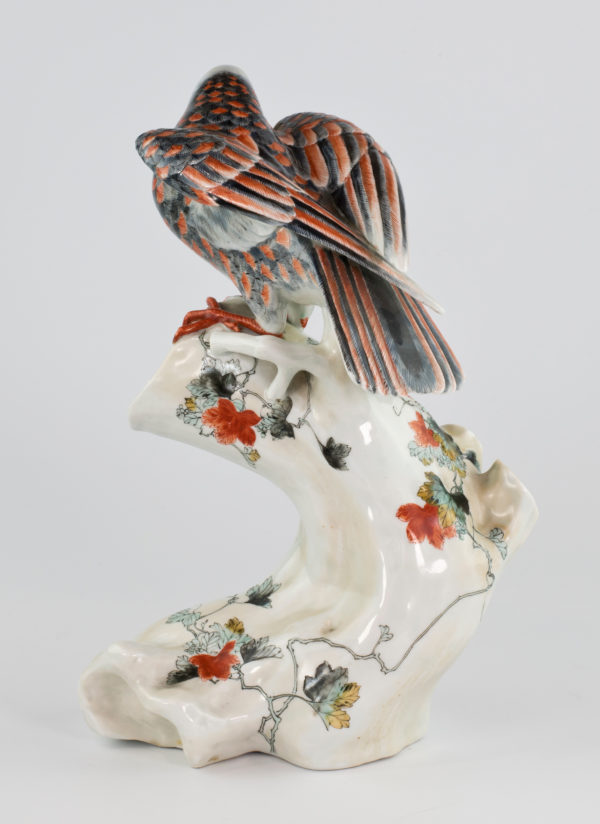 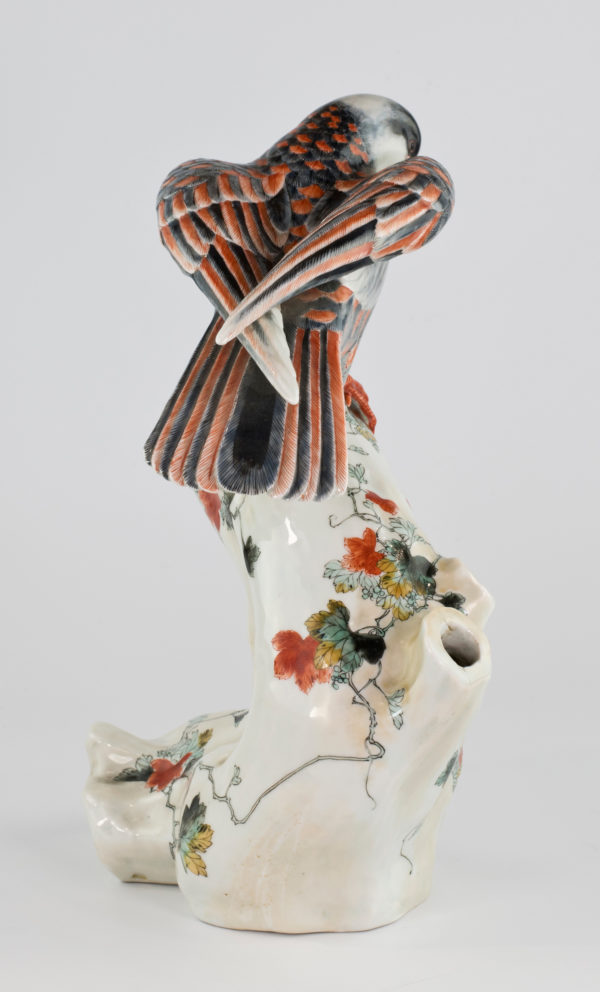 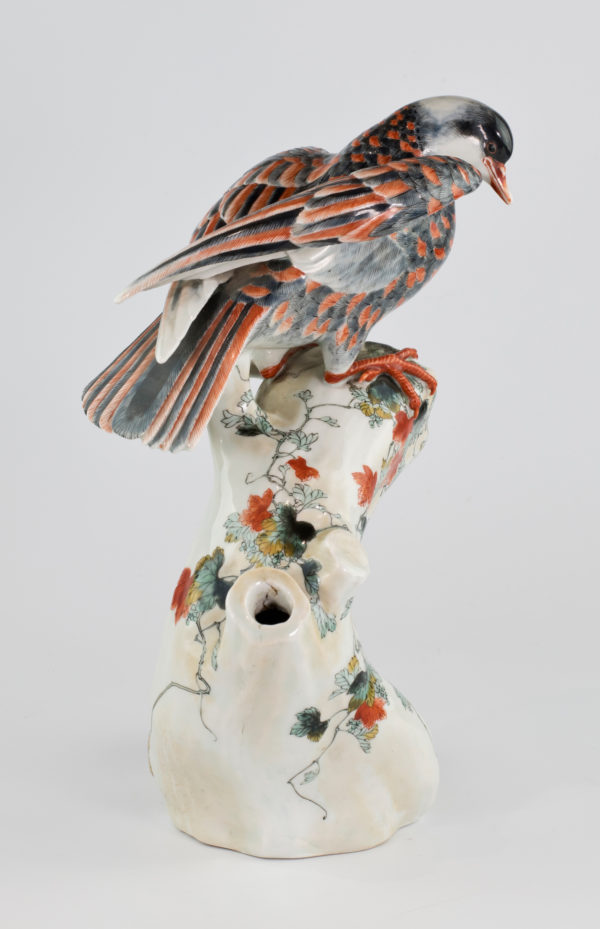 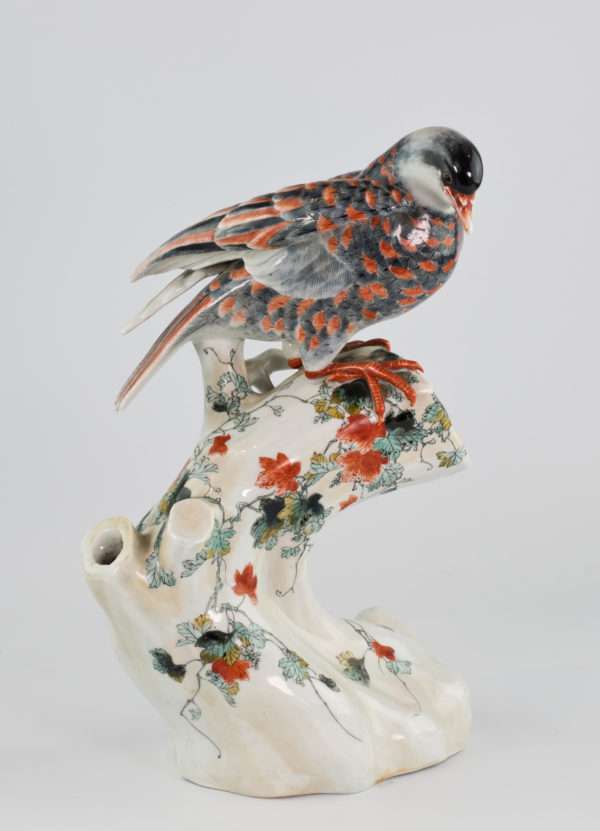 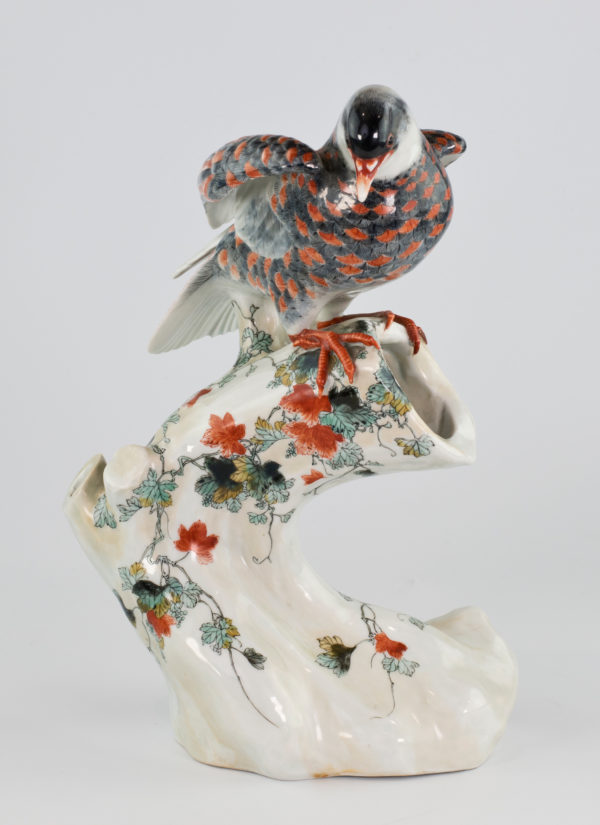 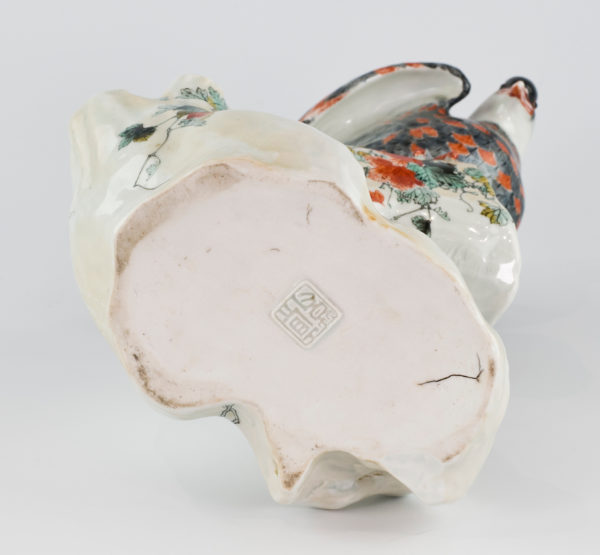 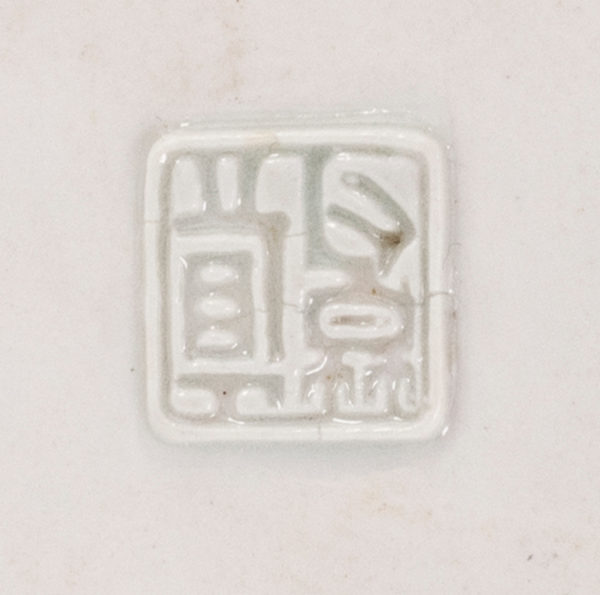 As part of our Japanese works of art collection we are delighted to offer this most unusual late Meiji Period 1868-1912, circa 1910, ceramic okimono of a bird resting upon the stump of a tree, the bird, likely to be a pigeon or dove, has been finely potted at the workshops of the imperial artist Makuzu Miyagawa Kozan , in this instance almost certainly Kozan II, the impressed seal on the underside of the base is recorded as in use leading up to the 1910 period according to the research available. This handsome ceramic okimono has been finely potted with particular detail paid to the birds feathers and feet, with its claws clutching the body of the tree, the tree stump itself has been stained and with wood effect detailing beneath the glaze, then painted with colourful trailing ivy’s upon the glaze, the bird finely painted in blue and red with lifelike jet black eyes. A most unusual study from the studios of a highly coveted imperial artist, and in immaculate un restored condition throughout.

Miyagawa (Makuzu) Kozan  (1842–1916) was a Japanese ceramist and was one of the major potters of the Meiji Period, his kilns were based in Yokohama and he went on to win many prizes and gold medals at the various expositions , eventually receiving the recognition his works deserved in 1896 by becoming one of only a handful of Imperial artists (Teishitsu gigeiin), many of his works can be found in the worlds leading collections and museums.

In perfect unrestored condition with typical firing flaw to underside of base.

Free worldwide shipping and a certificate of authenticity are included in the price of this item.