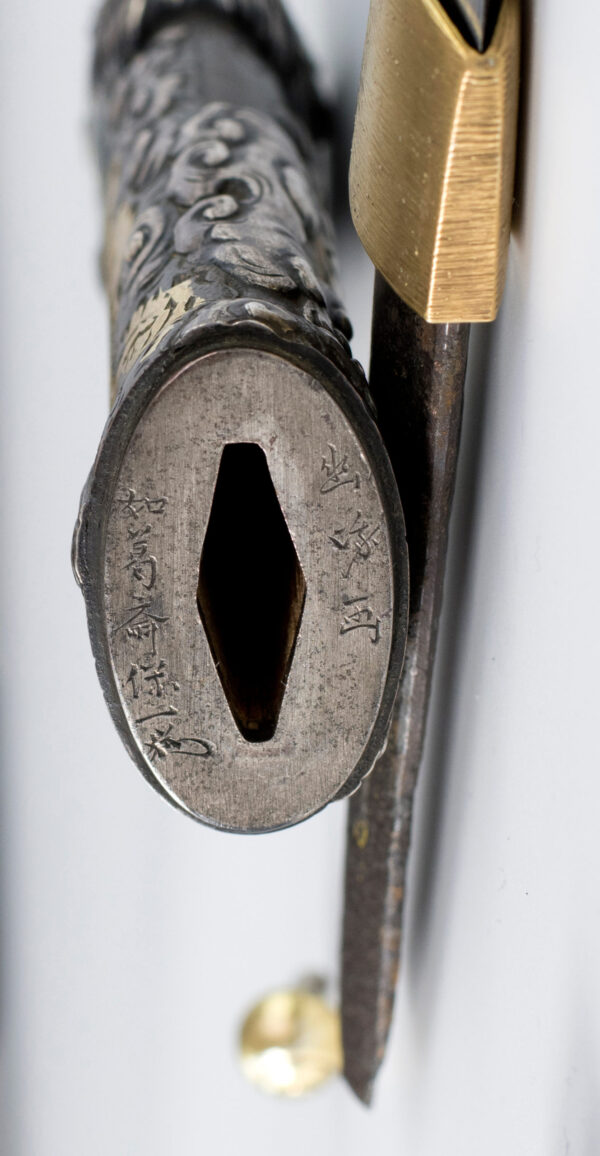 As part of our Japanese works of art collection we are delighted to offer this most unusual late Edo early Meiji period 1868-1912 , ken tanto, the main body of the scabbard is formed from solid shibuichi, carved to represent clouds upon which silver mounted and gold decorated dragons appear as the dominant feature, the ken formed blade is further carved with a dragon chasing the flaming pearl. The solid silver mounts are signed by the artist Jokatsusai Yasukazu who is recorded as being active between 1850-1880 , unusually the mounts are also signed with an inscription that reads Yusho ga , this translates to “an image of mysterious and tranquil beauty” and would tie in with the dragons amidst the swirling clouds, as in this example it refers to the tranquil dragon, which is a mysterious and profound existence in universe and heaven.

The Tang on this blade is signed Amakuni, this would be in honour of the legendary founder of the Yamato school and was not in any way intended to deceive.

The artist is listed on page 545 in The Toso Kinko Jiten by Wakayama Takeshi: Surname Kobayashi 小林. The artist is the same as Chinju / Yoshihisa珍寿. There are known works of Kozuka and Fuchi-kashira by the artist with signatures如葛斎保一Jokatsusai Yasukazu (Jokatsusai Hoichi) with kao, and 保一Yasukazu (Hoichi) with kao. He studied under Tsuchiya Takechika 土屋武親. Jokatsusai Yasukazu (Jokatsusai Hoichi) lived and worked in Tottori, Inaba Province (modern Tottori Prefecture), late Edo Period.

The artist is also listed under the name of 珍寿Yoshihisa (Chinju), on page 484, in The Toso Kinko Jiten by Wakayama Takeshi: Surname Kobayashi. Given names: Zenbei and Yasuhira. A student of Takechika 武親. Kobayashi Yoshihisa 小林珍寿 (also known as Jokatsusai Yasukasu如葛斎保一) was an official retainer artist for the Tottori Domain, Inaba Province (modern Tottori Prefecture) since the Ansei 5th year (1858). He was active into the mid-Meiji period and some of his work bearing his age of 66 years old.