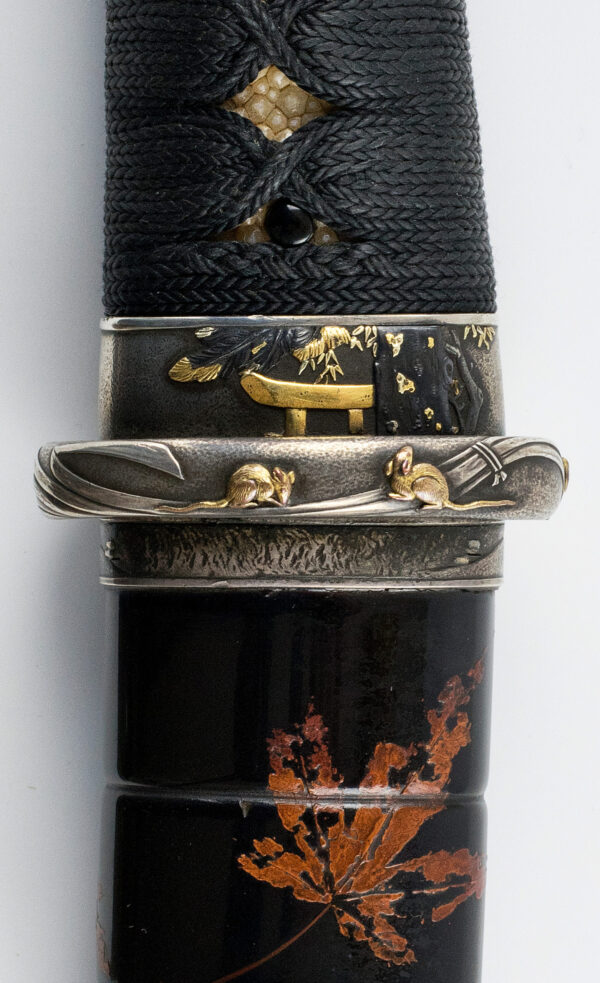 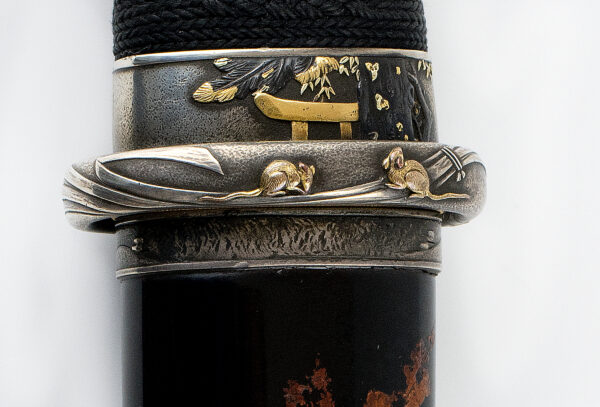 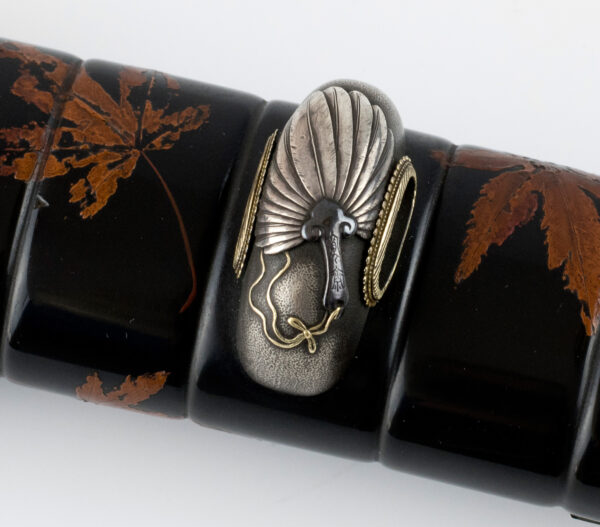 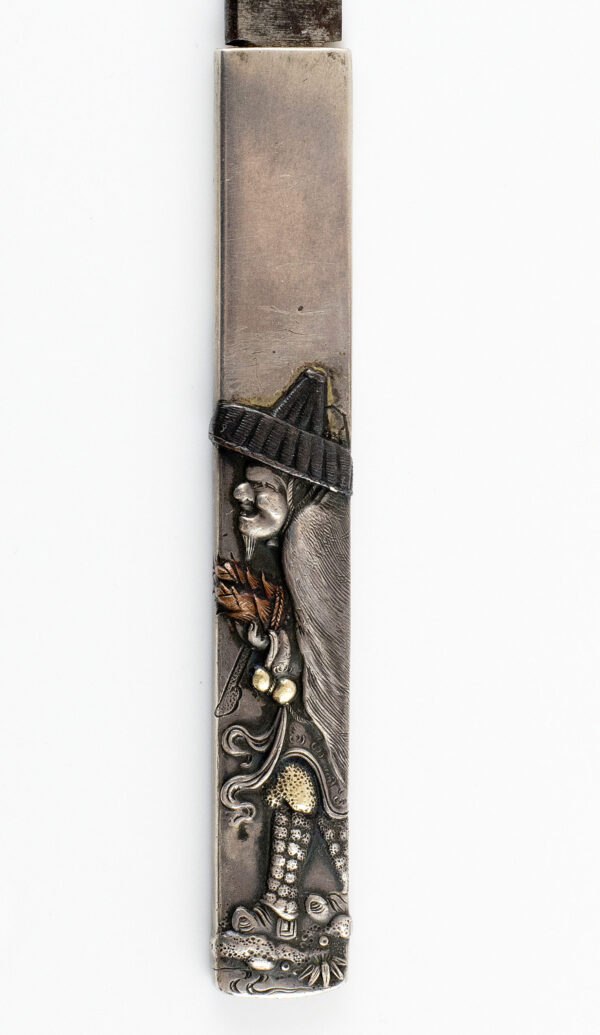 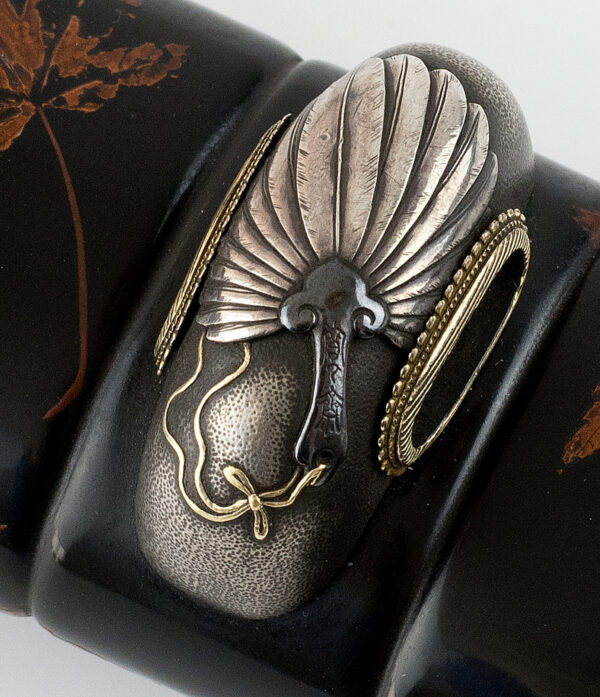 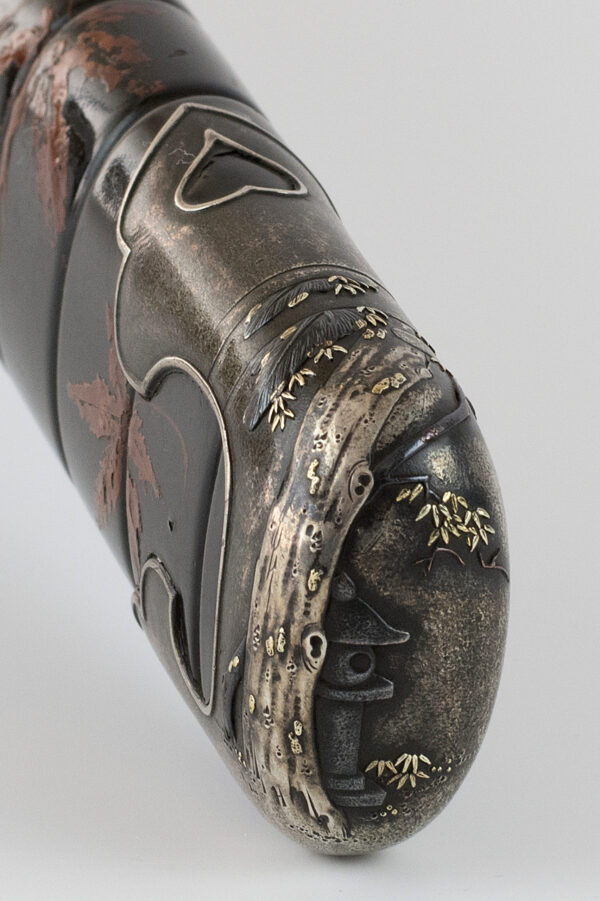 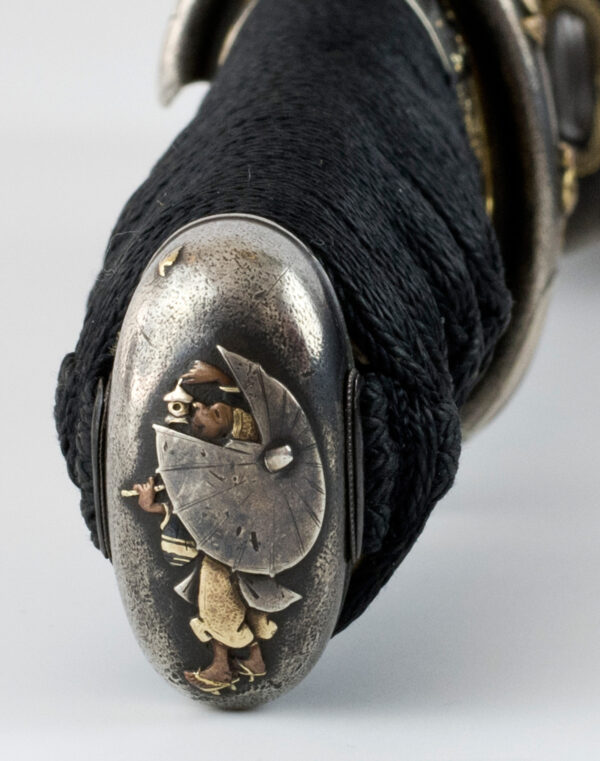 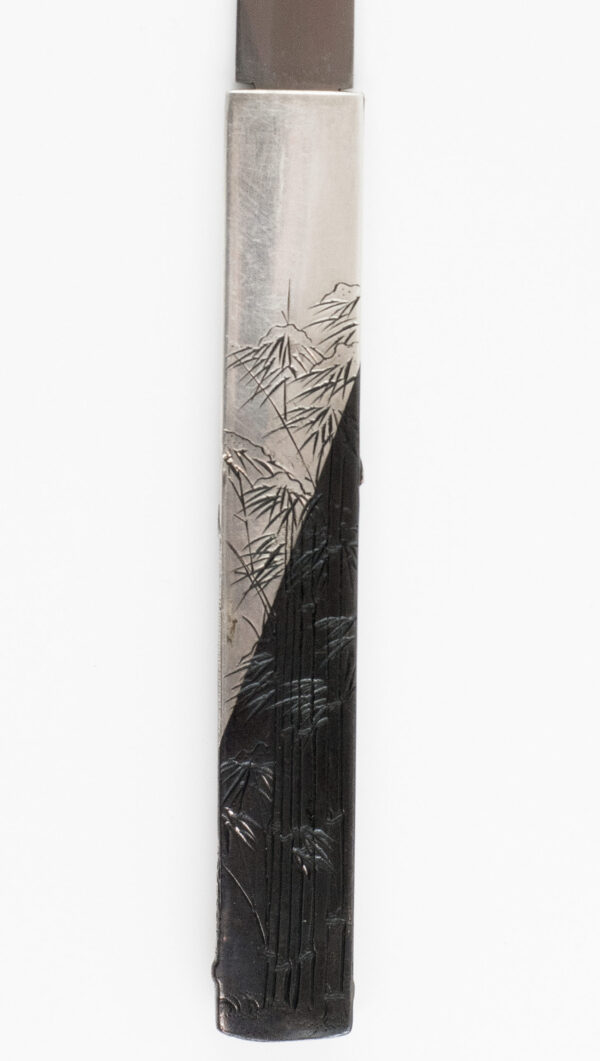 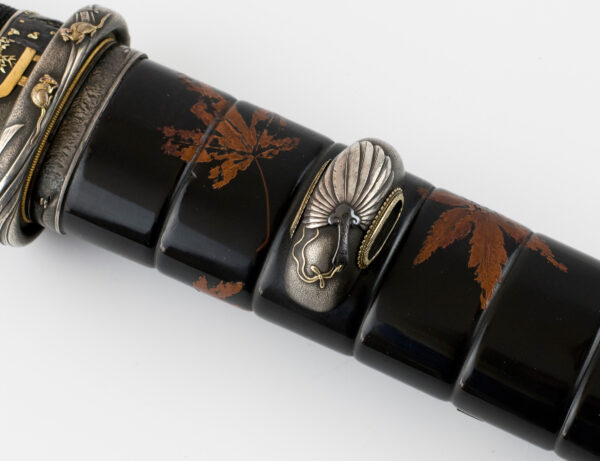 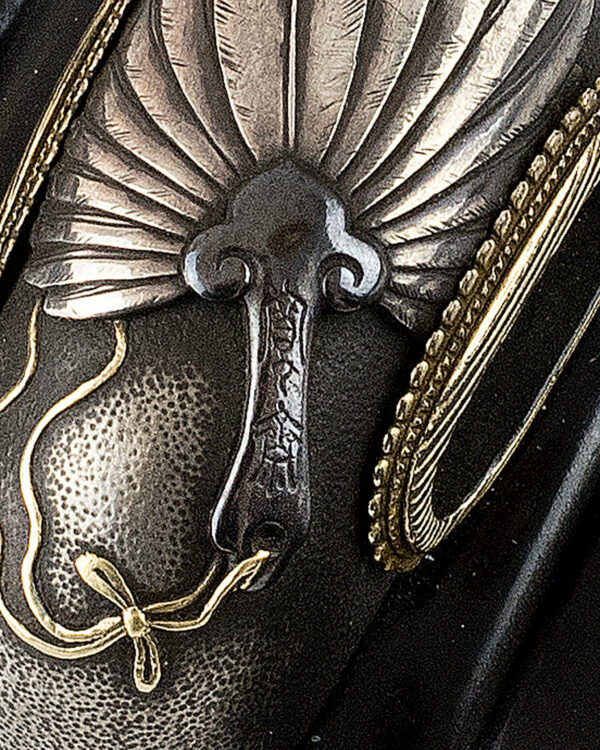 As part of our Japanese works of art collection we are delighted to offer this Edo/ Meiji period 1868-1912 finely mounted Tanto or short sword, the black lacquer Saya (scabbard) has been decorated with red Autumnal Maple leaves, perhaps indicating the annual spectacle of falling leaves near shrines at Arashiyama (Kyoto ) or the Aridoshi shrine in Osaka, and may also give meaning to Hagakure , the book of the Samurai (the hidden leaves) giving practical and spiritual guidance to warriors. The opulent mixed metal fittings are decorated with various stories further relating to shrines and indicating that the Tanto was possibly commissioned by or presented to a retiring priest or other high ranking dignitary. The gold and shakudo decorated fan on the Kurikata is signed in tiny script by Kansai, see literature below for further information and possible attribution along with the other mixed metal mountings, all of which carry messages within the decoration. The Kozuka is unreliably signed by an Edo period master Nagasone Kotetsu ii (active 1670-1690) , the Kozuka blade itself looks to fit the period, as is likely does the blade of the Tanto,  the unsigned tang mounted within a fine Ray skin handle (Tsuka ) bound beautifully with a pair of Shi Shi dogs ( Temple guardians) within the grip, a delightful Meiji period mixed metal mounted Tanto that would sit as a fine example in any Japanese works of art or metalwork collection.

The suggested artist for the opulent mounts: 寛斎Kansai is also known as Katsurano Bunyu (Katsurano Fumio, dates 1868-1940) 桂野文雄, who studied under Kano Natsuo at the age of 22 in Edo (Tokyo). Please see pages 66 and 541 in the Toso Kinko Jiten by Wakayama Takeshi for biography, however two further metalworkers with the same name are also listed below .

The artist Nagasone Kotetsu’s signature is on the Kozuka blade although in my view the blade might have been made by a later Edo period sword-smith, for example Minamoto no Kiyomaro who often emulated the blades of the past great masters, furthermore I am reliably informed that two of the Kanji characters on the blade of the Kozuka are written incorrectly, although many examples of this signature have been recorded.

The Fittings: Mixed metals and alloys of gold, silver, shakudo and shibuichi.

Kurikata : Chinese style fan, one of the auspicious symbols.

Kozuka handle: The subject matter of the Kozuka: Moso 孟宗 (Meng Zong in Chinese) who is a Chinese paragon of filial piety, and lived in the 3rd century AD. On the reverse of the Kozuka, a bamboo grove is aptly pictured. In the depth of winter when his mother was ill and expressed a strong desire to eat stewed bamboo shoots, Moso bravely went out to dig in the snow. Moso is often depicted as one of twenty four Paragons of Filial Piety (二十四孝 )

Kojiri : Decorated with traditional lantern (tōrō)   made of stone, wood, or metal, like many other elements of Japanese traditional architecture, it originated in China where they can still be found in Buddhist temples and Chinese gardens.