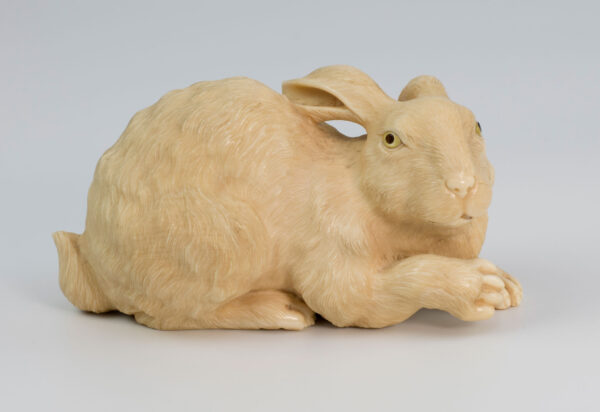 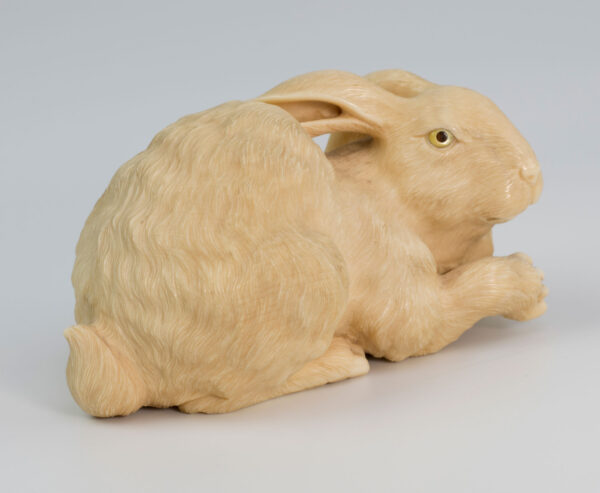 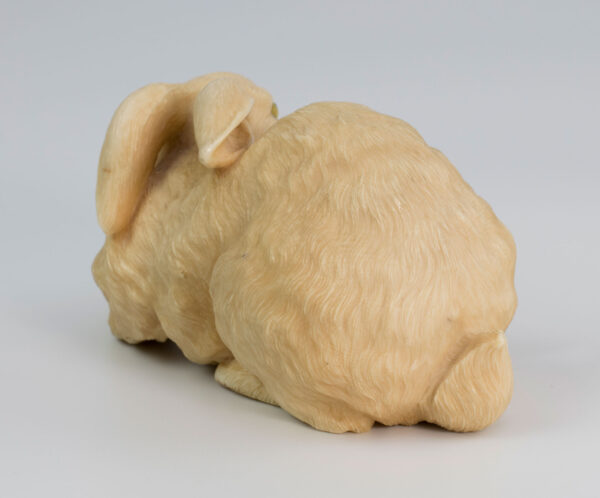 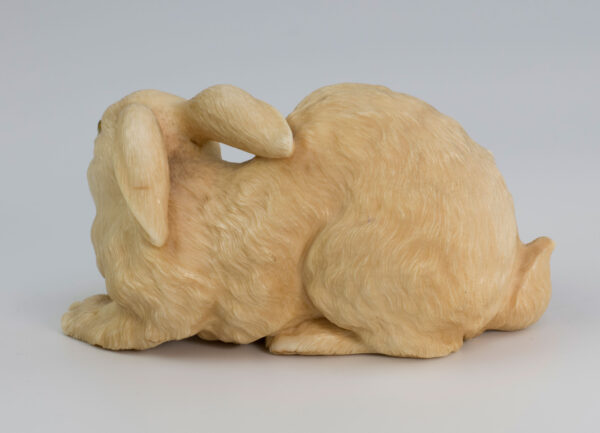 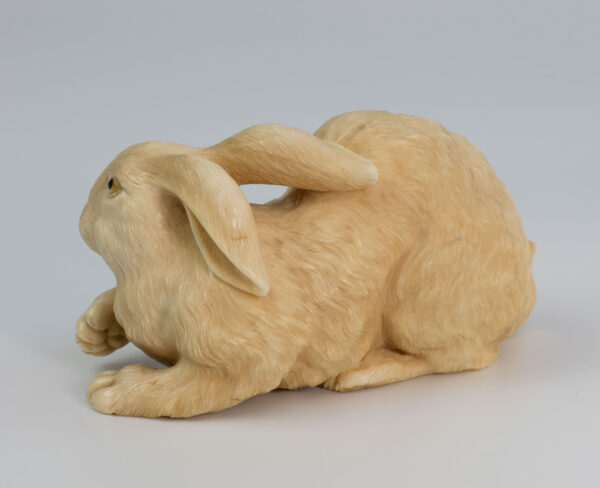 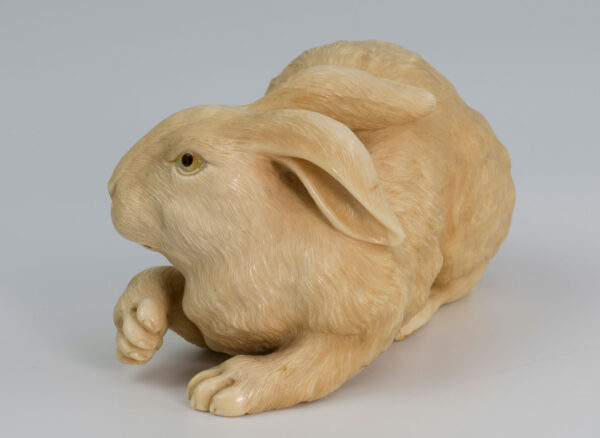 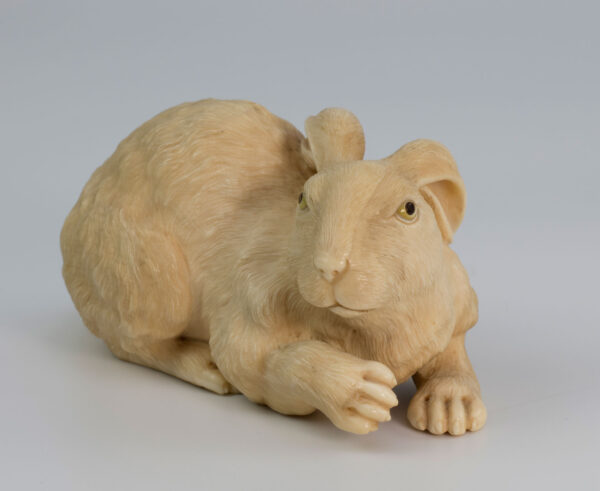 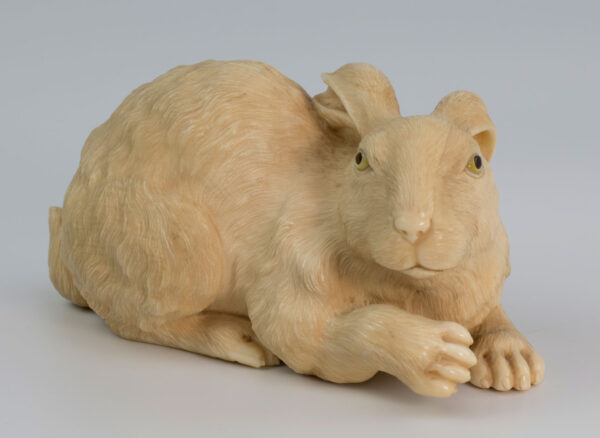 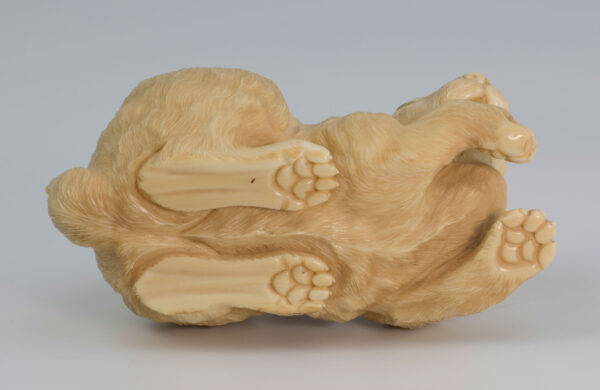 As part of our Japanese works of art collection we are delighted to offer this sensational quality Meiji Period 1868-1912, circa 1890 , carved ivory okimono depicting a seated Hare, the unknown highly skilled artist has carved this animal in the most lifelike pose imaginable, the anatomy is sheer perfection, the fur rendered in such painstaking detail throughout, the eyes finished in amber with black pupils so realistically portrayed they appear alive. It would be a bold statement to suggest names such as Ishikawa Komei or other contemporary carvers of his magnitude, but the dense weight and cut of the ivory and quality of this one piece carving certainly leave me in no doubt that this was a top drawer carver with access to the best materials , and if it were signed by Komei you could not question it, thus I am offering this as an unsigned okimono, but one that I firmly believe would sit at the top shelf of any serious Japanese okimono collection.

Unfortunately, due to pending legislation, this item can only be acquired by UK clients and limited countries outside the EU.

Legislation to prevent the sale of items containing ivory, has now passed through Parliament, and will be in force later this year. Whilst we all agree that the poaching, and trade in ‘modern’ ivory is abhorrent, the ban will also include ivory carvings, created prior to 1947.
It is the generally held opinion of both art experts, and clients, that this, largely, all encompassing legislation, is at best ill conceived, and will have no effect upon the level of poaching in Africa.
Sadly, it would appear that the opinion of an assortment of ‘Celebrities’, and younger members of the Royal Family, have greater resonance than those who have knowledge of the historical context of the use of ivory as a medium to create not only art, but functional items, over thousands of years, and largely, in a pre Industrial era where culling of these majestic beasts was both legal and deemed necessary to keep the population sustainable.

It might be worth noting that Her Majesty the Queen has amassed arguably the greatest collection of works of art containing Ivory than any other head of state in the world, we can only hope these will be preserved for the following generations . As I am sure that future generations will regard the ban and the possible destruction of antique works of art carved from ivory, with bewilderment, or, with the same scorn we have for the burning of books by the Nazis, or the demolition of the Bamiyan Buddhas by the Taliban.

In my opinion, the okimono I offer, displays all the features that characterise the pinnacle of artistic merit achieved by those Meiji Period sculptors. It is not a cheap ‘Tourist’ carving that, sadly, became the norm throughout the 20th Century, and which led to the 1947 date line, agreed by various counties, in an attempt to put an end to the Industrial scale killing of elephants.

Maybe one day somebody can rationally explain to me how wiping out centuries of European history with the looming ban on antiques containing ivory, whilst keeping legal the sale of pianos and other musical instruments containing ivory produced from Elephants killed as late as 1975, and I will gladly sit up and listen. Let me state loud and clear for the record that there is no greater animal lover or wildlife advocate than me, I despise any form of animal cruelty, particularly poaching. Hopefully with time and education we can rid the world of these utterly distasteful practices, however, destroying or prohibiting the sale of genuine works of art containing ivory will not be the cure, of that I am sure.

Whilst I am legally able to offer this prized okimono who’s future ownership should certainly remain legal, I do so in the hope that it finds a new owner who appreciates the workmanship, and accepts that this amazing Japanese carving stems from a different time in our history, if legislation deems this is to be my very last offering of an ivory Okimono, then I am deeply saddened, but equally proud to be bowing out on such a high.

Free UK delivery and a certificate of authenticity are included within the price of this item.