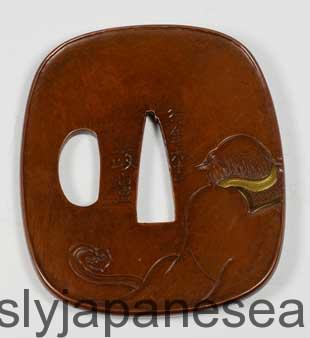 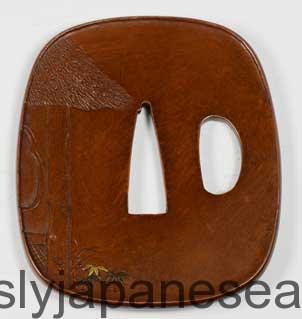 As part of our Japanese works of art collection we are delighted to offer this super quality copper and gilt highlighted Tsuba depicting Daruma holding a sceptre to one side , with a part thatched house and grasses to the other , this late Edo / Meiji period Tsuba is finely carved in the Katikiribori technique, gold highlighted and artist signed , the artist known as Masayoshi and with a suggested age of 61 , a nice addition to your Tsuba , Samurai arms and armour or Japanese metalwork collection .

Daruma is the founder of Zen Buddhism in Japan (552 AD). Originally an Indian priest named Bodhidharma, he crossed all over China to introduce Buddhism in Japan. The legend says that he crossed the sea from China to Japan standing on a bamboo. Daruma is mostly shown in a position of meditation. He is said to have lost the use of his arms and legs by meditating for nine years in a cave. Therefore he is often shown as Daruma doll without legs and arms.

The Daruma dolls, or today simply called Daruma, are a symbol of good luck in Japan. Students having their exams or companies starting a new enterprise, buy a Daruma for good luck.