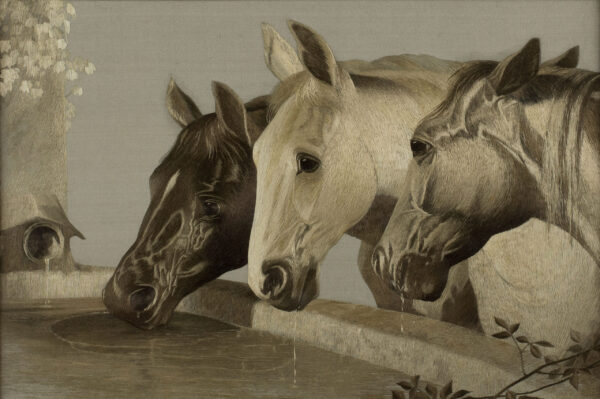 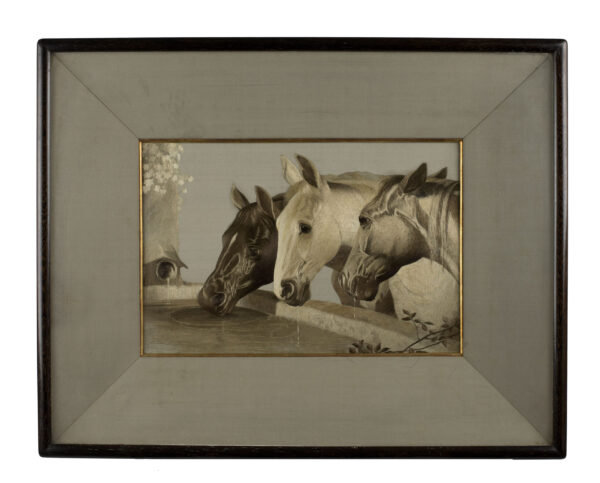 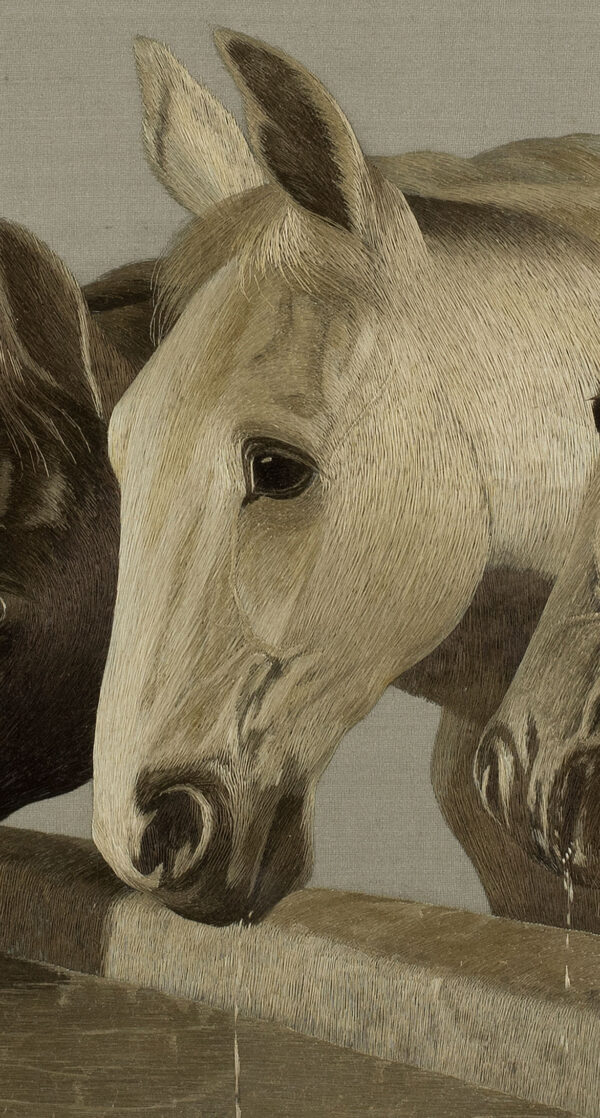 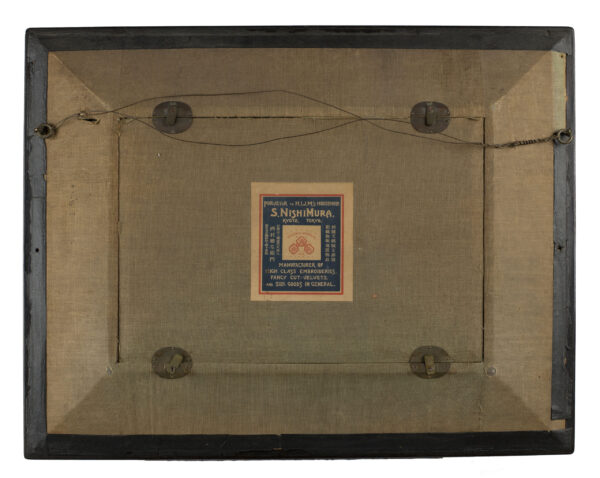 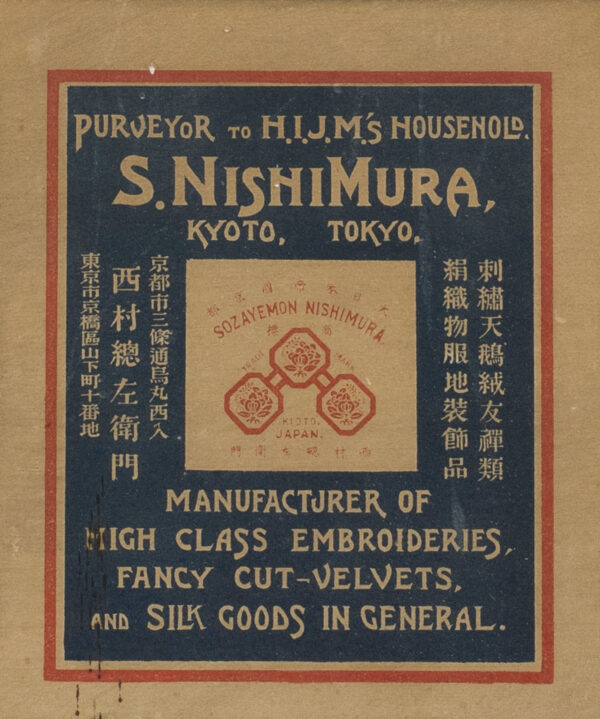 As part of our Japanese works of art collection we are delighted to offer this most charming Meiji Period 1868-1912 silk textile, finely rendered as three horses drinking at a trough, the textile housed within its original hardwood glazed frame and backed in with its original Nishimura company label, the artist has captured a quite majestic pose of three thoroughbred horses taking on water from a trough, the finest stitching imaginable brings these creatures to life, even down to the water trickling back into the trough, a most fascinating study by arguably the finest textile manufacturers of the period, a work of art that has been preserved for over 120 years and now available for your enjoyment.

There is little doubt that a major part of the phenomenon of Japanese works of art exploding onto the worldwide stage leading up to and during the Meiji period was bought about by the textile manufacturers of Kyoto, the most recognized of which will undoubtedly be the Nishimura company , founded in Kyoto in 1670 as textile traders,

It was the 12th generation manager Nishimura Sozayemon (1855-1935) aged just 17 and remarkably adopted into the family as the son of a Chinese scholar who took the company to its dizzy heights. As early as 1873 just one year into his tenure the company were exhibiting at expositions and even during that early period the company picked up significant awards and medals with recognition both nationally and overseas , particularly in Paris in 1878 , thereafter the factory moved to new premises in Kyoto , presumably having outgrown their original site , this move coincided with the building of the new Imperial palace in Tokyo where Nishimura were commissioned to provide 64 embroidered wall panels . the highest accolade had surely now been achieved as “suppliers to the Imperial household” this was the ultimate marketing tool which was now used widely in the sales campaigns and specifically on the product labels , during the 1890’s the company continued to innovate and execute new techniques , they employed the finest artists and embroiderers taking the company from strength to strength , multiple gold medals and notable awards were achieved at various national and international Expositions , there is little doubt that the appetite for Nishimura products were insatiable, particularly in America and Paris where know traders were buying and or commissioning multiple items for their clients collections, and indeed their own gallery’s , make no mistake some of these incredible works of art would have been expensive items at the time , with the finest pieces commissioned for the clients of wealthy merchant traders and Imperial household members .

It seemed as if Sozayemon coupled with his accolade of supplier to the Imperial household had cornered this highly lucrative market, this was the case certainly until the 1890’s when the company faced stiff competition from the new kid on the block ,Iida Takashima , a company founded in 1831 by Iida Shinshich I (1803-1874) as a small retailer of non silk drapery products , this modest shop called Takashima would through successive generations of the Iida family quickly rise to prominence as a major player on the worlds stage , Imperial household suppliers and ultimately stiff competition for the long established Nishimura company . Having only gained a licence for the manufacture and sale of silk products as late as 1855 the new generation led by Iida Shinshichi II began to make inroads into the Kyoto retail market supplying mostly clothing rugs and its speciality Fukusa,  to the emerging middle classes , in 1877 Iida first exhibited  nationally winning numerous awards.

Following the untimely death of Shinshichi II in 1878 the company passed into the hands of the remaining siblings headed up at this point by the daughter in law of the founder Iida Utako who continued development of domestic products but with an eye on the emerging decorative textiles market, winning awards at major national and international expositions , the growth was rapid and Iida were clearly beginning to make inroads into the market once dominated by the Nishimura company , even head hunting Nishimuras finest artists to work for them , eventually in 1887 they too were commissioned by the Imperial household to supply amongst other items drapery and wall coverings for the new Imperial palace , this accolade resulted in two of Iida’s weavers being elevated to the honorable rank of “Imperial artist” followed later in the 1890’s with the Iida company officially recognized and now able to market themselves as “official manufacturers to the Imperial Household ” , had Iida outwitted their peers , clearly there was demand for two such important companies in what was at the time and clearly remains today a red hot market for arguably the finest textiles ever produced .