Without doubt, the exceptional metalwork produced by Japanese master craftsmen during the Meiji period is my absolute passion. I find the gorgeous artistry, attention to meticulous detail, use of precious... 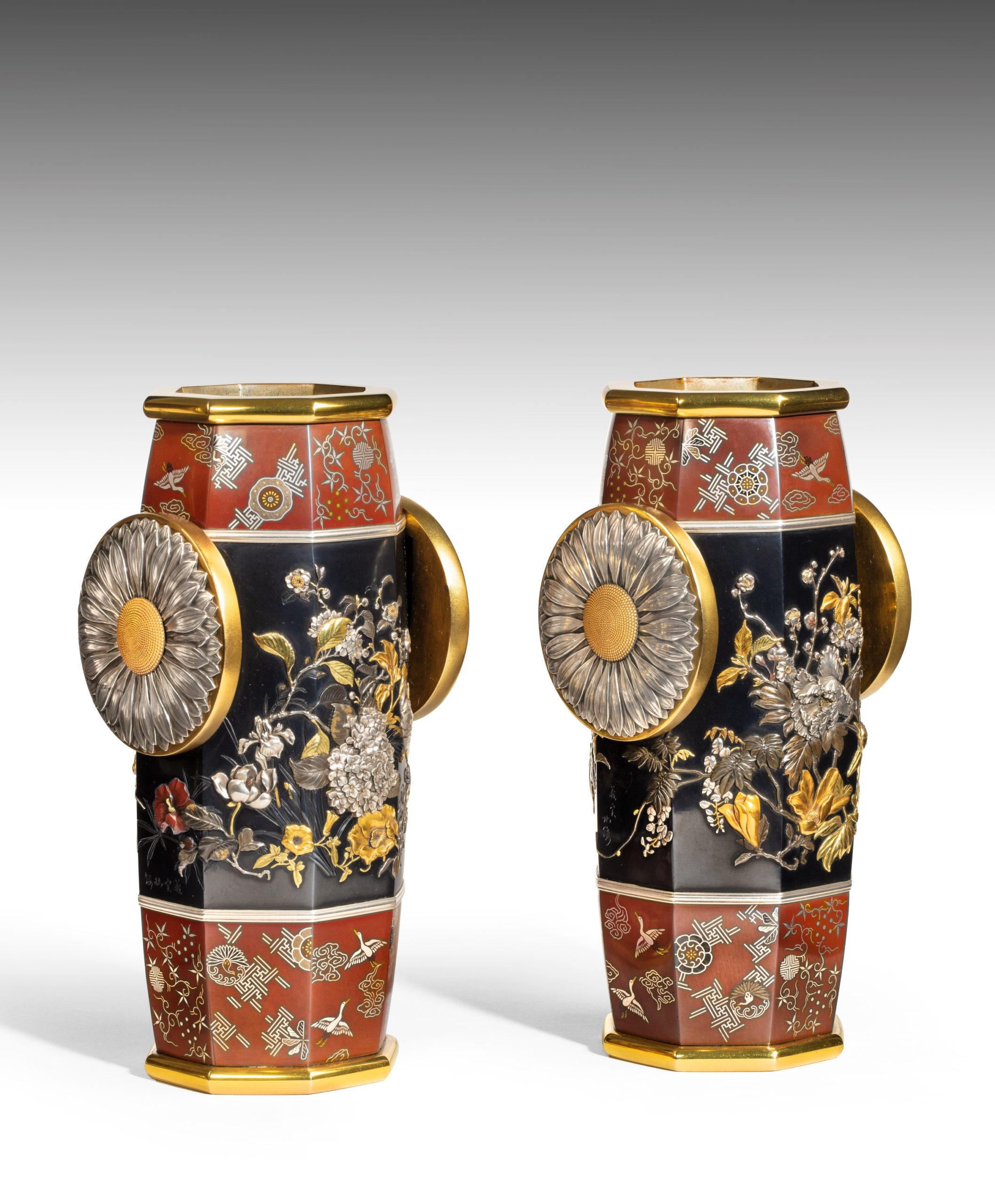 Without doubt, the exceptional metalwork produced by Japanese master craftsmen during the Meiji period is my absolute passion. I find the gorgeous artistry, attention to meticulous detail, use of precious metals and unique alloys and the sheer unbelievable quality to be truly breathtaking.

The history of fine metalwork in Japan goes back many hundreds of years and whilst it is impossible to recount the full story in these few words, a brief summary is useful in seeing how this art form evolved.

Prior to the Meiji Restoration in 1868 Japan was a feudal society with a rigid class system, the military Samurai class being the effective controlling elite. The position of the Emperor was largely that of a divine but remote symbolic ruler. The country was divided into many provinces, which were in turn governed by the local dominant Samurai family headed by a Daimyo (Lord) and backed by a great many loyal retainers.

This governing structure meant that wealth and to a large degree the artistic communities were concentrated around the Imperial household in Kyoto and the numerous provincial capitals. Going back a thousand years, fine metalwork was required by the Samurai in the adornment of their revered swords and in the manufacture of lavish armour. It was also required by numerous temples and shrines for the production of religious sculpture, incense burners and similar. Generally speaking the Samurai possessed great artistic refinement and taste reflected in the beautiful architecture and interiors of their castles and residences and the artworks therein.

From this brief background we can see that highly advanced metalworking skills developed and evolved over a long period and to a level not seen elsewhere in the world.

It is not possible to detail all the techniques and unique features of the craft but the main ones that set them apart from anything encountered elsewhere are worth highlighting.

When the Meiji Restoration came about the vast majority of these skilled artisans suddenly found themselves without their main source of income – the ruling Samurai class. This resulted both from the edict banning the wearing of swords in 1876 and then the subsequent de-structuring of the feudal/class systems as Japan adopted a more “modern” system of government. Both Samurai and their artists found themselves virtually redundant.

Thankfully the Meiji Emperor was a great patron of the Arts and his Governments’ effort was directed towards encouraging metalwork masters to utilise their skills and knowledge in the production of new and more “fashionable” works of art! The sheer quality of Japanese metalwork in all its existing forms appealed greatly to many of the early foreign diplomats, travellers and military advisors who were in Japan during the early years of the Meiji Restoration. It was a natural inevitability that demand would rapidly increase for these fabulous old things never before seen by the Western World. It therefore followed that the artists who created them would now start to make different works that were even more desirable to their new customers. Instead of sword guards and other sword fittings they now turned their attention to lavish boxes, vases, koro, sculptures, spectacular chargers and similar.

Also at this time Japan started to exhibit at the various world Trade and Art Expositions, Fairs and Exhibitions. This resulted in a truly remarkable explosion of demand from Europe and the United States who were enthralled and entranced by these superb and previously unseen exhibits. These artists had moved from the brink of poverty to a position of having to satisfy an insatiable demand for their wonderful creations. This demand was to continue certainly for the rest of their lives and often for one or two generations of their skilled pupils. Major artists became extremely wealthy individuals and enjoyed an enviable position within this new Japan.

Many workshops and studios were subsequently established in order to satisfy this massive demand. Some comprised highly skilled masters with just a few pupils through to far larger operations. However it is worth noting that a large workforce did not necessarily mean a lower quality although it is fair to say that demand had to be met across a whole spectrum of price ranges.

Further innovations involved metalworkers and enamellers combining their skills to produce elaborate works employing the full range of metal alloys together with vivid enamels often on an item crafted from pure silver. The effect could be truly stunning.

Among the major acknowledged artists were Kano Natsuo, Unno Shomin, Suzuki Chokichi, Unno Moritoshi, Yamada Motonobu, Shoami Katsuyoshi who together with their pupils were instrumental in driving quality and progress. These talented artists were frequently commissioned by the Imperial Household, the Government and exclusive privately owned outlets such as the Ozeki Company. Their work is both very rare and of commensurate value.

Again space does not permit a full listing of all makers, schools or larger manufacturers but some of the more frequently encountered ones are as follows

The Komai Company specialised in the production of iron works of art richly inlaid and damascened with pure gold and the various alloys all in meticulous detail. Designs frequently featured famous beauty spots, shrines and palaces together with tranquil scenes from nature.

The Miyao Company specialised in producing patinated and gilded bronze sculptures, mostly figural especially Samurai. These spectacular works on their elaborate gilded wooden stands came in sizes that ranged from a few inches to true life-size!

Genryusai Seiya was a bronze caster producing very high quality Okimono including figural sculptures but also of all sorts of animals, both domestic and highly exotic thanks to the opening of a Zoo in Tokyo!

In truth it would take a large book to fully discuss all the various techniques and makers but I hope this briefest of backgrounds conveys some of the astonishing achievements of these artists. Handling even a modest work can bring immense pleasure, a masterpiece will leave you speechless!

Output from both periods can vary in quality from the very finest pieces destined for the wealthy connoisseur through to superb middle range pieces and on to a lower quality product destined for more of a mass export market.

The best way to judge quality is to handle as much material as possible, visit museums, sales and exhibitions and study any reference book available. Beauty is often in the eye of the beholder and this could apply more to the actual design and artistry on any given item.

Technical or manufacturing quality manifests itself in the complexity of the mixed metal inlay or damascening, the quality of carving, the metal used as the base, the presence of complex border designs, the depth and range of colour employed in patination.

A final point worth bearing in mind is that often, some of the very finest items were of a very small scale – sometimes no more than a few inches in height.

As with any work of art, condition always has a bearing on its desirability and value. By its very nature metalwork is fairly resistant to everyday knocks although a substantial impact could obviously cause distortions or abrasions of varying severity some of which can be rectified, others that cannot.

Many works, for example Koro and jars with covers came in two or three separate parts and the absence of say the lid will have a dramatic effect on values. Always make sure that all elements are present.

Oxidisation of the surface of the metal is often encountered. This is where the metal has reacted over time with the atmosphere around it. This can cause the surface to become bloomed or dull or simply very dirty. Thankfully in skilled hands these effects can be reversed and a work can be fully returned to its original condition. This can have a very positive effect on its value and its appearance.

The more serious type of damage is where someone has not realised that the work is meant to be patinated with these subtle, gently-varying colours. They believe it should be bright and shiny and set about it with abrasives and polishes of various natures! If the metal surfaces are not heavily abraded then again skilled hands can fully restore the correct patination using exactly the same processes as when they were made and similarly this will greatly enhance the appearance and value.

It is a certainty that any signed piece will be far more desirable than the same piece unsigned, but the issue is far more complex than that. Nearly all of the makers, large or small, of high quality or otherwise produced works that were both signed and unsigned. I have encountered works that were undisputedly by a famous maker but carry no signature. Many truly top quality works are unsigned. This is a frustration encountered in many areas of Japanese Art.

The reasons for this are not always clear. Maybe the signature and full description is beautifully written on the custom made storage box (tomobako) that was supplied with all good pieces. It was never envisaged that these boxes would be separated from the treasures within and thus the items themselves were not signed.

It could also be that whoever commissioned the piece asked for it to remain unsigned or where protocol prevented it – this is sometimes said to be the case where items were destined for Imperial or Governmental households.

Another theory is that the quality of the work speaks for itself and therefore the maker did not need to make his mark on it – it was obvious who made it.

Also, at times makers co-operated by fulfilling commissions and orders for one another in which case that may be the reason for items to remain unsigned.

It is always wise to be fully satisfied that the signature appearing on a work matches the expected style and quality of the purported maker. Driven purely by potential financial gain some items can carry spurious marks added at any time since their manufacture.

General advice is to buy from reliable trustworthy sources who will stand by all attributions, signatures and condition reports until such time as the collector is totally confident in his own judgement and knowledge.

There is a well-known saying “something is worth what someone will pay” – and in truth nowadays that applies perfectly to these wonderful works.

Certainly pieces by artists such as Kano Natsuo, Unno Shomin, Suzuki Chokichi, Unno Moritoshi, Yamada Motonobu, Shoami Katsuyoshi and similar were rare and very expensive when they were made! The same applies to anything carrying the seal of the Ozeki Company. These masterpieces represent the pinnacle of this art form and are sought by wealthy collectors world-wide. They therefore command very high prices.

However In my opinion there are many high quality works that sit just below the finest pieces and represent staggering value for money. Makers such as the Nogawa Company, Komai, Miyabe Atsuyoshi, Seiya, Miyao, Gyoko and their peers all fall into this category.

Thankfully it is still possible to form a collection of superb work from these various manufacturers for an outlay that looks very modest when compared to the equivalent Chinese or European producers.

Finally and needless to say damage has a very dramatic effect on value. However damage can bring fine pieces within the collecting range of many…again it is a matter of personal choice.

It is my contention however that a few better things are always preferable to a high volume of lesser items!